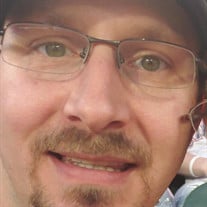 Funeral services for Mr. Josh Rogers, 37, of Henderson, will be held at 2:00 p.m. on Friday, February 28, 2020, in the chapel at Crawford-A. Crim Funeral Home with Rev. Mike Ledbetter officiating, under the direction of Crawford-A. Crim Funeral Home. The family will receive friends from 12:30 p.m. until service time on Friday at the funeral home. The Rogers family will also receive friends following the service at the Rusk County Recreation Association where a meal will be served. Mr. Rogers passed from this life on February 25, 2020, in Henderson. He was born October 18, 1982, in Longview and spent all of his life in Henderson. He attended Henderson High School and later became a barber here in Henderson at The Barber Shop. Josh very much enjoyed his job and it gave him the opportunity to talk to and get to know his customers. In his spare time, he was a gamer, and he absolutely loved his children. Josh and Macie had also recently started attending First Baptist Church. He was preceded in death by his grandparents, Joe Frank and Juanita Rogers, and Don Mosley. Survivors include his wife, Macie Rogers of Henderson; parents, Rex and Judy Rogers of Henderson, and Teresa Taylor of Houston; grandparents, Jo Mosley of Houston and Retha Hinsley of Henderson; children, Ally Rogers, Aason Rogers, Letha Cipoletta, and Leland Points, all of Henderson; brother, Larry Freeney and wife Jovani of Houston; sisters, Megan Warren of Kilgore, Tiffany Reaves and husband Trevor of Henderson, and Tasha Mims and husband Jason of Bartlett; many nieces and nephews, other family, and a host of friends. Honorary pallbearers will be Brent Jackson, Brian Jackson, Larry Freeney, Eddie Hale, Trevor Reaves, and Joe Rogers. Words of comfort may be shared with the family at www.crawfordacrim.com.

The family of Mr. Josh Rogers created this Life Tributes page to make it easy to share your memories.

Funeral services for Mr. Josh Rogers, 37, of Henderson, will...