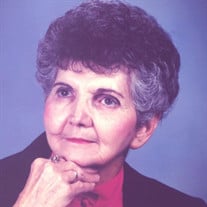 Celebration of Life services for Mrs. Josephine Wilbanks, 85, of Henderson, will be held at 2:00 p.m. on Saturday, January 19, 2019, in the chapel at Crawford-A. Crim Funeral Home with Bro. Mark Headrick officiating. Burial will follow at Mt. Hope Cemetery under the direction of Crawford-A. Crim Funeral Home of Henderson. The family will receive friends from 1 p.m. until service time on Saturday, at the funeral home. Mrs. Wilbanks went to be with her Lord and Savior on January 17, 2019 at Henderson Health and Rehab after a lengthy battle with Alzheimer's. She was born May 6, 1933 in Rusk County, Texas to the late Sephus Alma Hyatt and Rosa Hyatt. She was a retired bookkeeper and in her later years worked for Jordan Home Health Care Services as an attendant. She was a long time active member of First Free Will Baptist Church. In addition to her parents, she was preceded in death by her husband, James Aubrey Wilbanks, two brothers, Sephus Alma Hyatt, Jr. and Joseph G. Hyatt; her sisters, Mary Alice Hyatt and Gracie Lochridge; and two halfbrothers, Ed and Vester Hyatt of Arkansas. Survivors include her daughter, Glenda Wallace and husband Richard of Henderson; grandson, Ryan Wallace and wife Laura of Euless, Texas; a very special friend, Cathy Price of Crosby, Texas; sister, Rosalee Burns of Henderson; and a host of friends, family and loved ones. Josephine had a passion for serving the Lord and ministering to people. She will be greatly missed. The family would like to thank all the earthly angels who took care of Josephine and who became like family to them, the administration and staff of Henderson Health and Rehab, and Hospice Plus, all who provided wonderful care to Josephine. Pallbearers will be Robert Holts, Chase Holts, Edward Ray Burns, Chris King, Gary Kappen, and Eddy Burks. Honorary pallbearers will be Buck Moore and Edell Husband. In lieu of flowers, the family requests that donations be made to the Alzheimer's Association, Dallas and Northeast Texas Chapter, in Josephine's memory, at 3001 Knox Street, Suite 200, Dallas, Texas 75205, or First Free Will Baptist Church of Henderson, Texas, 913 Richardson Drive, Henderson, Texas 75654. Words of comfort may be shared with the family at www.crawfordacrim.com.

Celebration of Life services for Mrs. Josephine Wilbanks, 85, of Henderson, will be held at 2:00 p.m. on Saturday, January 19, 2019, in the chapel at Crawford-A. Crim Funeral Home with Bro. Mark Headrick officiating. Burial will follow at Mt.... View Obituary & Service Information

The family of Mrs. Josephine Wilbanks created this Life Tributes page to make it easy to share your memories.