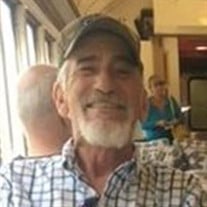 Funeral services for Mr. John "Rooster" Robertson, 68, of Henderson, will be at 11:00 a.m., Tuesday, Oct. 12, 2021 at Crawford - A. Crim Funeral Home chapel with Rev. Josh Blizzard officiating. Interment will follow at Rusk County Memorial Gardens under the direction of Crawford - A. Crim Funeral Home of Henderson. Family will receive friends one hour before the service at the funeral home. Mr. Robertson passed away October 8, 2021 at his residence. He was born August 29, 1953 in Henderson to the late James D. and Avis (Alexander) Robertson. Rooster spent most of his life in Henderson. He was a truck driver and finally retired as a correctional officer. He was a member of the local Back Road Bandit Jeep Club. He enjoyed the outdoors, camping, and being with his family. In addition to his parents, he was preceded in death by his son, Jonathan Robertson. Survivors include: his wife of 47 years, Sue Robertson of Henderson; daughter, Melanie Cross and husband Brett of Henderson; sister, Margie Dell Stuart and husband T. A. of Henderson; two grandchildren, Brayden Cross and Grayson Cross; and his life-long friend that he saw every day, Rodger Goss of Henderson. Pallbearers are Brett Cross, Brayden Cross, Chris Cross, Mike Cross, Talon Devires, and Chad Hlavaty. Honorary pallbearers are Grayson Cross, Josh Kelsey, Rodger Goss, and Cassidy Walker. Memorial contributions may be made to the Rusk-Panola Children's Advocacy Center, 610 Hwy 79 North, Henderson, TX 75652. Condolences may be made at www.crawfordacrim.com.

The family of Mr. John "Rooster" Robertson created this Life Tributes page to make it easy to share your memories.