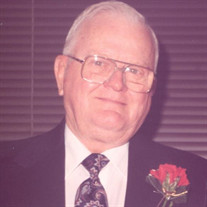 Funeral services for Mr. John B. McDonald, 91, of Troup, will be held at 10AM on Monday, April 1, 2019 at Crawford - A. Crim Funeral Home with Rev. Joe Barron officiating. Interment will follow at McDonald Cemetery. A visitation will be held on Sunday, March 31 from 2PM to 4PM at the funeral home. Mr. McDonald passed away Wednesday, March 27, 2019 at his residence. He was born on October 23, 1927 in Laneville, Texas to the late Mr. Jacob Gates McDonald and Sally Davis McDonald. He was a World War II veteran of the United States Army, and he and his lovely wife had many successes throughout their life. John started out in business with a service station in Henderson in 1956, and eventually came to own an auto parts warehouse distribution center in 1964. He also, along with other investors, started City National Bank, and served on the Board of Directors, as well as Oakbrook Nursing Home in Whitehouse, Texas. In 1986, John opened McDonald Chevrolet in Troup, Texas, and built several homes in his 80's and 90's. He always had a love of buying and selling. John's other accomplishments include 62 years as a Mason, where he was a Golden Trial Recipient, 32nd Degree Scottish Rite member, as well as becoming a Shriner in 2001. He was also a member of the Jeep Patrol. Preceding Mr. McDonald in death were his parents, Jacob Gates McDonald and Sally McDonald; wife, Nadine W. McDonald; daughter, Sylvia McDonald; as well as 17 brothers and sisters. Survivors include his sons; Johnnie McDonald and wife Janice, Dewayne "Tooter" McDonald and wife Robin, and Mike McDonald and wife Gayle; 14 grandchildren, 28 great-grandchildren, 2 great-great grandchildren; and his faithful caregiver of 35 years, Maria Lezema. Pallbearers will be Gary McDonald, John Ray McDonald, Matthew Martin, Brandon Martin, Kim McDonald, and Kevin McDonald. Honorary pallbearers will be the Sharon Shriners and Jeep Patrol. Condolences may be made at www.crawfordacrim.com. In lieu of flowers, the family ask that donations be made to Hospice of East Texas, 4111 University Blvd., Tyler, Texas 75701, or Shriner's Children's Hospital.

Funeral services for Mr. John B. McDonald, 91, of Troup, will be held at 10AM on Monday, April 1, 2019 at Crawford - A. Crim Funeral Home with Rev. Joe Barron officiating. Interment will follow at McDonald Cemetery. A visitation will be held... View Obituary & Service Information

The family of Mr. John B. McDonald created this Life Tributes page to make it easy to share your memories.