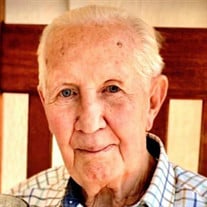 Graveside services for Mr. John Reagan Fancher, 85, of Mt. Enterprise, will be at 2:00 p.m., Tuesday, January 26, 2021 at Shiloh Cemetery with Rev. Bryan Sellers officiating. Interment will follow under the direction of Crawford-A. Crim Funeral Home of Henderson. Visitation will be from 12:00 - 1:00 p.m., Tuesday, Jan. 26, 2021 at the funeral home. Mr. Fancher passed away Monday, Jan. 25, 2021 at his residence. He was born Feb. 12, 1935 in Garrison to the late Arthur and Clara Fancher. John served his country in the US Army during the Korean War. He was a Land Appraiser for the Panola County Tax Office, and was a member of Landmark Baptist Church. In addition to his parents, he was preceded in death by his son-in-law, Brett Finley Survivors include: his wife, Gladys Fancher of Mt. Enterprise; son, Blaine Fancher and wife Leona of Huntington, and daughter, Gay Finley of Tyler; four grandchildren, Mandy Fancher, Braydon Finley, Chad Fancher, and Kandis Skibo; and seven great-grandchildren. Pallbearers are Richard Hudman, Braydon Finley, Chad Fancher, Ricki Keeling, Kenneth Wilson, and Eddie Turner. Honorary pallbearers are Doug Burkley and Ronnie Hudman. Condolences may be made at www.crawfordacrim.com.

The family of Mr. John Reagan Fancher created this Life Tributes page to make it easy to share your memories.