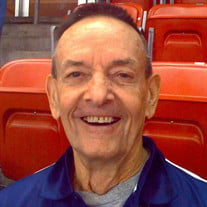 Coach Joe Wylie, 86, of Henderson, joined his Heavenly Father August 29, 2018. He triumphed over Alzheimer’s Dementia and completely regained his sharp coaching, play makers mind. Memorial services will be at 11:00, Saturday, September 1 at the Crawford A. Crim Funeral Home Chapel with Rev. Michael Acres presiding. Visitation will follow the services at the funeral home. Coach was born to W E and Monnie Meyer Wylie on May 27, 1932 in Henderson. From the time he was in the eighth grade he knew what he wanted to spend his life doing. He graduated from Henderson High School in 1950 where he lettered in baseball, basketball and football. He was the Vice President of his senior class, voted Most Popular Boy by his classmates and named Who’s Who in Sports by his teachers. He remained involved with his life time friends from his school days until he was no longer able to attend their quarterly get together. Joe attended Rice Institute (now Rice University) where he played basketball and served as the captain of the Owls baseball team. After graduating from Rice, Joe received a special invitation from Uncle Sam, to serve in the United States Army. He proudly served his country in Germany for 2 years. He often joked that his position was so important there, that it took Elvis Presley to replace him. After active duty he served in the reserves until 1962. Joe taught and coached at Lanier Junior High in Houston for 4 years before returning to his hometown and Alma mater in 1960. He received his Masters in Education from the University of Houston in 1962. Coach Wylie was a favorite with both his students and his co-workers. In 1966 the Lion Den’s annual was dedicated to him by the student body. It said in part, “He has excelled in the fields of teaching and coaching. In the classroom and on the field, his warm enthusiasm and lively wit made everyone at ease.” In 1969 he became assistant principal at the high school. Then, he became known as Mr. Wylie. He served as AP until he went to Central Administration as the districts audio/visual director in 1984. He retired in 1992 after dedicating 36 years to educating, coaching and encouraging every student to be the best they could be. Joe loved God, his family, his country and sports. He was a long time member of the Texas Lefties Golf Association, the World Lefties and the East Texas Seniors. He loved playing with his buddies at the Overton and Woodhollow Golf courses. But most of all, he loved playing with his “Lady Di.” They traveled to Ireland, Scotland, Hawaii and numerous states within the continental USA to play. Joe was always easy to find on the course, as he always wore a shirt that paid tribute to his country. However, their grandchildren held priority as they went from soccer fields, to baseball, softball and football games, cheerleading contests and volleyball games, often several in one day. Joe’s heart was huge and he genuinely loved people from all walks of life. He considered those he taught and coached ‘his kids.’ He took extreme pleasure in keeping up with their success and always took time to stop and visit when he happened upon one. He was a true southern gentleman, always tipping his hat to the ladies, opening doors and standing between them and the traffic. He instilled this in his grandsons as well and smiled with pride when they opened the door for ladies. While Joe was blessed with many wonderful events in his life, he was especially proud of the HHS 1968 basketball team after going to regionals for the first time in school history, HHS 1968 football team going further and winning more than any team in school history, four awesome opportunities to watch the Master’s practice rounds in person, attending his much loved Rice Owls first ever College World Series games in Rosenblatt Stadium and the following year watching as they won the College World Series to become National Champions. But, he was never more proud than the dedication day of W E Wylie Elementary and Monnie Meyer Wylie Primary Schools. To have just a very small part in making the new schools a reality was something he always took pride in because he was always a teacher and coach at heart. He loved children. Preceding Coach in death were his parents, brothers Earl, Roger and his wife Charlsie, Alfred and his wife Gladys and two infant brothers, William E and Charles Meyer. The mother of his children Jeanine Summerford Lawhon. Also, a young man he loved dearly, Mahlon Acres. Left to cherish many wonderful memories are his wife Dianne, son David (Debi), daughters Lynn Sitton (Kerry) and Joann Hinsley. Those he loved as his own, Deidra Neuman (Gary) and Amy Rockey (Colby). Grandchildren; Korey (Taylor) and Kerby (Sammie) Sitton, Jana and Judson (Sara Beth) Hinsley, Keller Wylie, Clint and Kaylee Sutton, Ava and Libby Rockey and Kelsey, Garret and Cole Neuman. Joe’s only sister Mary (Glynn) McGee and his sister-in-law Joyce Wylie, many nieces, nephews, special cherished friends and two very special young men that he and Dianne love as their grandchildren, Dr. Matthew (Rebekah) Acres and Reverend Michael (Kelsey) Acres. He never got to hold and enjoy baby Mahlon or baby Dre, but he will certainly smile as he watches them from above. In lieu of flowers the family request that you make a donation to the Mahlon Acres Memorial Scholarship or Coach Joe Wylie Memorial Scholarship, c/o HISD Foundation, PO Box 728, Henderson, TX 75653 or Hospice of East Texas, 4111 University Blvd., Tyler, TX 75701 Pallbearers will be grandsons: Korey Sitton, Judson Hinsley, Keller Wylie, Clint Sutton and Dr. Matthew Acres. Honorary pallbearers will be: Kerby Sitton, Garret Neuman, Ronnie Bell, the HHS basketball and football team of 1968 and the HHS class of 1950. Condolences may be made online at www.crawfordacrim.com.

The family of Coach Joe Wylie created this Life Tributes page to make it easy to share your memories.