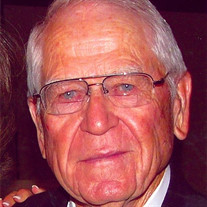 Joe Orville Todd of Henderson joined his Lord and Savior in heaven on August 12, 2018. Born January 2, 1922, Orville was the 7th and youngest child of James Clayton Todd and Bessie Busby Todd. Orville attended public school at Oak Hill until the school closed and then transferred to Henderson High School, graduating in 1939. Orville attended Kilgore College then one semester with his brothers at the University of Iowa to run track before transferring to Stephen F. Austin in the fall of 1941, where he was a student when the attack on Pearl Harbor occurred. Like many Americans, Orville immediately enlisted to serve his country. A member of the Army’s 88th Infantry Division and 913th Field Artillery Battalion, Orville served as Staff Sargent and Forward Observer with his unit from North Africa to the Po Valley in northern Italy, receiving a Bronze Star, 2 Oak Clusters, and numerous citations along the way. Orville, or “Joe” as he was called in the army, was selected from the 913th Field Artillery Battalion as its most outstanding enlisted man, “seeing more front-line action than any other individual in the 913th Battalion from Cassino until the enemy was defeated in Italy.” After the war ended, Orville returned to SFA in the spring semester of 1946 to complete his college education and served as President of the Senior Class, President of the Sawyers social club, Senior Class Favorite, and was active in SFA Athletics, especially the track team. Orville graduated with a degree in Agriculture in 1947. In addition to raising cattle, Orville taught agriculture classes for returning veterans, had a brief stint working in the oilfields with Gulf Oil Company, and in 1953 began his long career at Henderson Clay Products. While at SFA, Orville met fellow student Bobbie Hargis of Nacogdoches, and the two of them became inseparable. Orville and Bobbie married on February 22, 1948. Baptized in the Todd Branch by Millville Baptist Church as a boy, Orville was later ordained a Deacon. Orville and Bobbie worshipped and served at Millville Baptist Church until the rural church discontinued services, at which time they moved their membership to First Baptist Church of Henderson. Their strong faith in God supported them through the toughest challenge, the accidental death of their oldest son, Joe Clayton Todd, at age five in 1957. Orville served for many years on the SFA Alumni Association Board of Directors and was honored as Outstanding Alumnus in 1981. Over the years, Orville also served on the boards of Rusk County Library, Nations Bank, Henderson High School Ex-Students, and Millville Cemetery Committee. Orville was a 32nd Degree Mason and a Shriner. After his love for God, family, country and community, Orville’s passions were raising cattle, hunting, and reminiscing with family and friends. His grandchildren and great-children particularly loved hearing Papa tell stories, whether they were about his time in the war or his lively family; we sat on the edge of our seats as if we were right there with him. Orville enjoyed meeting people of all ages and found a way to connect with every person he encountered. He had a wonderful sense of humor, a boisterous, infectious laugh, and he never met a stranger. Greeting Orville in heaven are son, Joe Clayton Todd, parents, Clate and Bessie Todd, and siblings, Mary Holleman, Grace Pratt Moffett, Ethel Bryan, Walter Todd, Ralph Todd, Erma Jean Douthit, and infant half-sister Oscar Lee Still. Celebrating Orville’s 96 years of life are his wife of 70 years, Bobbie Hargis Todd of Henderson, son and daughter-in-law Richard and Debbie Todd of Henderson, daughter and son-in-law Bobbie Ann and Ron Anderson of Nacogdoches, grandchildren Meredith Todd of Longview, Morgan and Michael Loosier of Henderson, Mallory and Jon Terry of Lindale, Paul and Sara Smith of Nacogdoches, Leigh and Patrick Middleton of San Antonio, and Mark Anderson of California, great-grandchildren Brayden, Cannon, Audrey, Abbey, Paisley, Kennedy, and Clate, along with many nieces, nephews, and extended family members. A Memorial Service will be held Wednesday, August 15, 2018, at 11:00 a.m. at Millville Baptist Church, northeast of Henderson, Texas, on FM 782, officiated by Dr. Bruce Tankersley and Rev. Bill Kuykendall. A reception with family will follow the Memorial Service. Pallbearers are grandsons and great-grandsons Paul Smith, Patrick Middleton, Brayden Loosier, Michael Loosier, Cannon Terry, Clate Terry, Jon Terry, and Mark Anderson. Honorary Pallbearers are nephews James Todd, Billy Todd Bryan, Cliff Todd, Ralph Todd, Cliff Stephens, John Holleman, Edward Weeks, Mike Teague, Pat Teague, John Hargis, Tim Elder, Richard Curtis, and friends Lee Dale Wallace, Joel Hale, Jimmy McMillen, Chad Dean, Kenneth Orr, Mike Toon, Milton McGee, Bob Slover, Bob Sitton, Burr Conway, Max Reinbach, Joe Wallace, and Harold Pool. If desired, memorial donations may be made in Orville’s name to Millville Baptist Church and Cemetery, c/o Mack Bassett, 110 Baker St., Henderson TX 75652 or the organization of your choice. Arrangements are under the direction of Crawford A. Crim Funeral Home. Words of comfort may be shared with the family at www.crawfordacrim.com.

The family of Mr. Joe Orville Todd created this Life Tributes page to make it easy to share your memories.

Joe Orville Todd of Henderson joined his Lord and Savior in heaven...