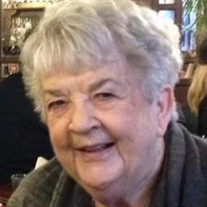 Jo Ann Orr Miller, 87, of Waco, TX, died Wednesday, August 11, 2021. Graveside services will be 10 a.m., Saturday, August 21, at Maple Grove Cemetery, Minden TX. Interment will follow under the direction of Crawford-A. Crim Funeral Home. A memorial service will be held October 23, at Lake Shore Baptist Church, 5801 Bishop Drive, Waco, TX. Jo Ann was preceded in death by her husband, Boyd Miller; parents, Merwyn and Dorothy Orr; and great-granddaughter, Harper Elizabeth Miller. She is survived by her son Gary Miller and wife, Beth; daughters Caryl Miller-Compton and husband, Kevin; Karyn Miller Brooks and husband, Joe; grandchildren Thomas Miller, David Miller and wife, Emily, Andrew Reynolds and wife, Elizabeth, Matthew Reynolds, Molly Hepp, Kyle Compton and wife, Macall, Ross Compton, Koby Compton, Jimmy Brooks and fiancée Nicolasa Roman, and Becky Brooks; and great-grandchildren, Paul and Luke Reynolds, Olsen Compton, and Danny Brooks, and surrogate daughter Juliana Reese and husband Brad Reynolds, and surrogate granddaughter Melody. Although Jo Ann would have labeled herself as “shy” as a child, folks who knew her would disagree. Jo Ann, the only child of Dora Deane (Dorothy) Sears and Merwyn Orr was born in her grandparents’ home in Mount Enterprise, TX, on August 24, 1933. Jo Ann’s zeal for reading and wry sense of humor were inspired by her mother, “a serious person, talented poet, well-read, ambitious for a person in that day and age.” Once when Dorothy was preparing turnip greens for dinner, her new husband said, “I don’t like turnip greens,” to which Dorothy responded, “But you could eat them, couldn’t you?” Merwyn said, “I guess I could eat grass.” His next meal was a plate of grass. Jo Ann certainly inherited her mother’s cleverness! Jo Ann’s father was partial owner of the Brachfield Cotton Gin Company and the country store in Brachfield, N. Orr & Sons. Jo Ann grew up in a house next to the store and was surrounded by cousins. She said that her cousin Sugene was her “best and worst friend” and instigator of havoc and laughter. Jo Ann often shared her story about riding a pig that “Susie” claimed was tame. “I sat on the pig. Sugene lied. That pig was not tame.” Jo Ann laughed until her dying day about the tame pig and other Sugene-isms. More of a pleaser than a prankster, Jo Ann possessed and taught her children and grandchildren how to laugh at themselves – and each other. After graduation from Henderson High School in 1951, Jo Ann earned a Bachelor’s degree in Home Economics from Texas State College for Women (now Texas Woman's University) in 1955 that led her to teaching positions in Odessa, New Deal, and Brownwood, Texas. In 1981, she earned a Master’s in Education from Tarleton State University followed by a Vocational Counseling License from University of North Texas. She was a Vocational Counselor at Brownwood High School and later Carthage High School. During a mission trip to Brownfield, Texas in 1957, Jo Ann met Boyd Gilbert Miller, who proposed to her twice before she said yes. They married November 28, 1958, at the Pleasant Springs Presbyterian Church in Patrick Community, Texas. Jo Ann was thrilled to marry someone with eight siblings! Boyd put up with Jo Ann’s silliness for 50 years (most of which were pretty darned happy) before his passing in 2009. He once said that their marriage was “just about as perfect as a marriage could be.” Exactly one year to the day after marriage, they had the first of three children. Jo Ann often jested that all three of her kids were accidents. She was sweet and sardonic, smart and silly. She encouraged love, faith, laughter, hard work, playfulness, and thoughtfulness. Above all else, Jo Ann and Boyd instilled the value of family in their children which carries on to this day. Jo Ann loved people, her church, social events, good wine and food. She had an adventurous spirit and cherished travel, especially with her children and grandchildren. She was particularly fond of Ireland and loved to share a “wee dram” with all who would join her. According to nephew Jerry Miller, “She was our matriarch, our Queen Mum, and people naturally gravitated to and wanted to be with her…. Short in stature, with a soft, melodious Texas drawl and plenty of homey aphorisms, she was nonetheless, as they say, a ‘pistol.’ Jo Ann had opinions about everything – books, movies, culture, and politics – and was not afraid to express them. Especially politics. She was a yellow dog Democrat in a Republican state, but was able to politically disagree, including within our own family, without being disagreeable….” In lieu of flowers, memorial gifts may be made to Lake Shore Baptist Church, 5801 Bishop Drive, Waco, TX 76710; the Harper Elizabeth Miller Scholarship, Waco ISD Education Foundation, PO Box 2369, Waco, TX 76703; or Shriners Hospitals for Children at LoveToTheRescue.org. Or, if you would like to contribute to the family for this very lengthy obituary…. Let the love and laughter of Jo Ann live on. Words of comfort may be shared with the family at www.crawfordacrim.com.

The family of Mrs. Jo Ann Orr Miller created this Life Tributes page to make it easy to share your memories.