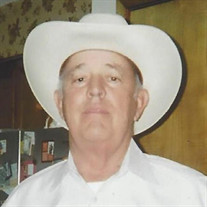 Funeral Services for Mr. Jimmy Richardson, 75, of Henderson will be held at 4:30 p.m. on Saturday, October 17, 2020, in the chapel at Crawford-A. Crim Funeral Home with Jason Taylor and Dale Taylor officiating. Interment will follow at Lakewood Memorial Park under the direction of Crawford-A. Crim Funeral Home. The family will receive friends from 5:00 p.m. to 7:00 p.m. on Friday, October 16, at the funeral home. Mr. Richardson passed from this life on October 14, 2020, in Tyler. He was born February 2, 1945 in Pittsburg, Texas to the late William and Annie Ruth (Taylor) Richardson. Mr. Richardson worked as an equipment operator for Texas Utilities where he retired after 21 years. He then became the Rusk County Constable for Precinct 5 and retired from that position after 16 years of service. He also was a farmer and rancher and owned his own trucking company, J & G Trucking. Mr. Richardson was a member of Clinton Lodge #23 AF & AM and was a member of Bar None Cowboy Church. Mr. Richardson was preceded in death by his parents, William and Annie Ruth Richardson; one brother, Bill Richardson; and uncle and aunt, Lloyd and Dot Richardson. Survivors include his wife of 44 years, Gloria Richardson of Henderson; sons, Rusty Flanagan and wife Korri of Henderson, Dusty Flanagan and wife Angie of Henderson; sister, Nancy Ruth Selman of Longview; grandchildren, Kaila Rountree, Cameron Flanagan, Tanner James Flanagan, Brooklyn Smith, Baleigh Smith; great-grandchildren, Colbie Rountree, Cade Rountree; and a host of other family and friends. Pallbearers will be Beau Rountree, Howard Davis, Gerry Warren, Robert Lewis, Stacy Ashby, and Ricky Gordan. Honorary pallbearers will be Sonny Truelock, David Tennison, and Randy Riggins. In lieu of flowers, the family requests that donations be made to Bar None Cowboy Church, 9162 TX-43, Tatum, Texas 75691. Words of comfort may be shared with the family at www.crawfordacrim.com.

Funeral Services for Mr. Jimmy Richardson, 75, of Henderson will be held at 4:30 p.m. on Saturday, October 17, 2020, in the chapel at Crawford-A. Crim Funeral Home with Jason Taylor and Dale Taylor officiating. Interment will follow at Lakewood... View Obituary & Service Information

The family of Mr. Jimmy Richardson created this Life Tributes page to make it easy to share your memories.

Funeral Services for Mr. Jimmy Richardson, 75, of Henderson will...