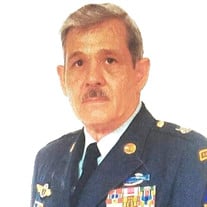 Graveside services for Mr. Jimmy Dow Wages, 82, of Henderson, will be held at 2:00 p.m. on Thursday, June 11, 2020 at Laurel Land Memorial Park in Dallas with Rev. Dwain Knight officiating. Interment will follow under the direction of Crawford-A. Crim Funeral Home. The family will receive friends from 5:00 p.m. to 7:00 pm on Wednesday, June 10, 2020 at Crawford-A. Crim Funeral Home in Henderson. Mr. Wages passed away June 5, 2020, at the Watkins-Logan Veterans Home in Tyler. He was born November 14, 1937, in Lubbock to John Howard and JoAnn Peikert Wages and grew up attending school in Paris, Texas. He served his country in the United States Army during the Vietnam War in the Airborne Division and as an Army Ranger. He retired from the Army after 39 years of service, including his time in the US Army Reserves, as an E-9 Sergeant Major. He also served in the National Guard of Texas and worked as a Jailer for the Rusk County Sheriff's office. Mr. Wages was a Scottish Rite Master Mason and a member of Pine Hill Lodge #95 AF&AM and was a Shriner. He was also a member of the First Christian Church in Henderson. He was preceded in death by his parents, Howard and JoAnn Wages; and wife, Sarah Wages. Survivors include: daughters, Sheree Etie and husband Mark of Clute, Paula Smith and husband Curtis of Pittsburg, TX, Jamie Parker and husband Michael of Salt Lake City, Utah, Francine Wages of Tyler; brother, Howard Don Wages and wife Ann of Mansfield; sister Pattie Batchelor of Irving; sister-in-law, Myra Crowley and husband Jerry; ten grandchildren, and three great-grandchildren with one more on the way. In lieu of flowers, memorial donations may be made to the Alzheimer's Association at P.O. Box 96011, Washington, DC 20090-6011. Words of comfort may be shared with the family at www.crawfordacrim.com.

Graveside services for Mr. Jimmy Dow Wages, 82, of Henderson, will be held at 2:00 p.m. on Thursday, June 11, 2020 at Laurel Land Memorial Park in Dallas with Rev. Dwain Knight officiating. Interment will follow under the direction of Crawford-A.... View Obituary & Service Information

The family of Mr. Jimmy Dow Wages created this Life Tributes page to make it easy to share your memories.