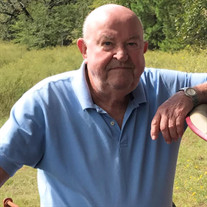 Jimmy (Jim) Norman Cadenhead passed away on February 14, 2021 after a brief illness. Born May 9, 1943 to Opal and Vernon Cadenhead in the Shiloh Community of Rusk County, Jim grew up on the farm and had many adventures in his youth. Jim attended Minden Schools until he transferred to Henderson High School after Minden’s closing. He played football as tackle for the Henderson Lions and graduated in 1961. After high school, Jim attended Kilgore College and graduated from Stephen F. Austin State University in 1966 with a teaching degree. After graduation, he taught shop and mechanical drawing in Nederland, Texas. In 1970, Jim jumped in a pool and landed on who would become the love of his life, Claire. Six weeks later, they married. They shared a love over their fifty years together that could make strangers smile. It was shown every day in everything they have shared together. In the early 1970s, Jim switched gears and cultivated a very successful 30+ year career in industrial sales. He was employed by various companies including: EG&G Sealol, Burgmann, Argo International, and AGI. Following his career, which took Jim and his family from Beaumont, TX to Baton Rouge, LA to Kingwood, TX to East Greenwich, RI and back to Kingwood, TX, Jim and Claire happily returned to the Shiloh Community in 2008 to enjoy their retirement. He loved being in the country, enjoying the peace and quiet of the cherished community of his youth and family legacy. Jim was the epitome of a family man who would do anything for them. He was very mechanically inclined, restoring tractors, cars, and trucks as a hobby. His favorites were his Dad’s 1953 Farmall Super H and a 1964 Corvette Stingray. He could never abide seeing an animal suffer, leading him to care for or rehome several rescues over the years. Jim loved taking care of his outside critters, including birds, barn cats, and the occasional raccoon. Jim is survived by his wife, Claire Cadenhead of the Shiloh Community; son, Neal Cadenhead and wife Tracy of the Shiloh Community; daughter, Leigh Anne Griffin and husband Michael of College Station; grandchildren Morgan, Grant, Barrett and Caden; sister, Peggy of the Shiloh Community and her family; many cousins and close friends. Jim was preceded in death by his parents, Vernon and Opal Cadenhead, and brother-in-Law, Jimmy Harris. There will be a service held at the Old Shiloh Baptist Church located at 11490 County Road 3131 S., Mount Enterprise, TX 75681 at 11:00 am on Saturday, March 13, 2021. In lieu of flowers, donations may be made to Henderson Animal Center, 1201 Highland Drive, Henderson, TX 75652 or to PetsFurPeople.org in memory of Jim Cadenhead. Words of comfort may be shared with the family at www.crawfordacrim.com.

Jimmy (Jim) Norman Cadenhead passed away on February 14, 2021 after a brief illness. Born May 9, 1943 to Opal and Vernon Cadenhead in the Shiloh Community of Rusk County, Jim grew up on the farm and had many adventures in his youth. Jim attended... View Obituary & Service Information

The family of Mr. Jim Cadenhead created this Life Tributes page to make it easy to share your memories.