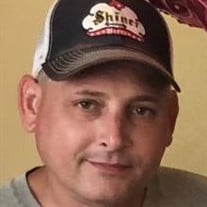 Funeral services for Mr. Jeff "Bodean" Carpenter, 45, of Tatum, will be held at 11:00 a.m. on Monday, October 21, 2019, at Tatum United Methodist Church with Rev. Dwain Smith officiating. Interment will follow at Tatum Cemetery under the direction of Crawford-A. Crim Funeral Home. The family will receive friends from 10 a.m. until service time on Monday, October 21, at the church. Mr. Carpenter passed from this life on October 18, 2019, at Christus Good Shepherd in Longview. He was born September 29, 1974, in Shreveport, Louisiana and has lived most all of his life in Tatum. Mr. Carpenter was a Sales Rep for GG Distributors in Tyler and was a sports and Nascar fan, and he liked to go fishing in his spare time. Jeff had a great love for his family and enjoyed coaching his children's teams in the sports that they were involved in. He loved to cook and certainly his dog Lucy. Jeff was a good and kind man and was a loving son, father and brother. He was preceded in death by his grandmother, Lucille Shaw; and brother, Tony Brown. Survivors include his mother, Shirley Brown of Tatum; father, James Brown of Converse, Louisiana; children, Kevan Carpenter, Kylee Carpenter, and Rylee Smith Carpenter, all of Tatum; brother, Charles "Buddy" Carpenter and wife Tracey of Papalote; sisters, Shelley Wheeler and husband Jason of Tatum, and Jessica Carpenter and fiancé David Gonzales of Tatum; and nephews and nieces, Justin, Courtnie, Ashley, Zack, and Brady. Pallbearers will be Wendell Moore, Byron Henry, Marjay Grisham, Dennis Christopher, Jason Lockridge, and Steve Proctor. Honorary pallbearers will be Kevan Carpenter, Justin Henry, Van Harris, James Allgor, Buddy Carpenter, and Jason Wheeler. Words of comfort may be shared with the family at www.crawfordacrim.com.

Funeral services for Mr. Jeff "Bodean" Carpenter, 45, of Tatum, will be held at 11:00 a.m. on Monday, October 21, 2019, at Tatum United Methodist Church with Rev. Dwain Smith officiating. Interment will follow at Tatum Cemetery under the direction... View Obituary & Service Information

The family of Mr. Jeff "Bodean" Carpenter created this Life Tributes page to make it easy to share your memories.