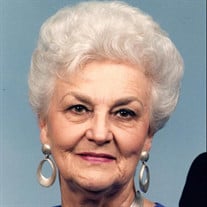 Mrs. LaJean Hardwick Tate, 93, of Henderson, Texas, passed away Wednesday, July 15, 2020 at Brookdale in Henderson. She was born March 28, 1927 in Crims Chapel and was a life-long resident of Rusk County. She was a 1944 graduate of Henderson High School. Jean worked for the War Food Administration during WWII in Corpus Christi and Lubbock from 1944-1945. Jean married Milford W. Tate after the war was over. She was a very active member of the First Baptist Church of Henderson and the Sanctuary Choir. Jean served as a children’s Sunday school teacher and was a mentor and role model for the youth. She was employed by Pritchard and Abbott as a clerk until 1956. Jean partnered with her husband Milford in establishing and running Tate Electric Company from 1961 until Milford’s death in 2012. Jean was a member of the Henderson Woman’s Forum. She was a lovely model and in many style shows. Jean always enjoyed home decorating, antiques and art. Jean loved working around her home, gardening, singing, helping others and taking care of her family and friends. She was preceded in death by her parents Robert Lee Hardwick and Otis Caroline Richey Hardwick; her husband Milford W. Tate; her son, John Bruce Tate; three brothers, Lewis, Robert Edward, and Willis Alton Hardwick. Survivors include: sisters-in-law Ernestine Tate of Waco; Wanda Jo Young and husband Billy Joe of Longview, and a host of nieces and nephews. Graveside services for Mrs. Tate will be held at 10:00 a.m. on Friday, July 17, 2020 at Rusk County Memorial Gardens with Rev. Don Edmiston officiating. Interment will follow under the direction of Crawford-A. Crim Funeral Home. The family will receive friends following the service at the cemetery. Pallbearers are Devin Tate, Stuart Arouty, Roger Moore, Tommy Strong, William Tate, and Spencer Arouty. Honorary pallbearers are Dennis Alexander, Donny Blair, Glen Deason, Charlie Gambrell, Mark Gibson, Mike Hardwick, Bill Hoebel, and Don Howard. Memorial contributions may be made to the First Baptist Church at 207 W. Main St., Henderson, TX 75652 and Hospice of East Texas at 4111 University Blvd., Tyler, TX 75701. Words of comfort may be shared with the family at www.crawfordacrim.com.

Mrs. LaJean Hardwick Tate, 93, of Henderson, Texas, passed away Wednesday, July 15, 2020 at Brookdale in Henderson. She was born March 28, 1927 in Crims Chapel and was a life-long resident of Rusk County. She was a 1944 graduate of Henderson... View Obituary & Service Information

The family of Mrs. Jean Tate created this Life Tributes page to make it easy to share your memories.