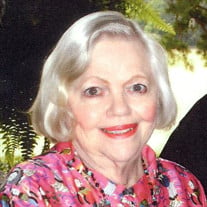 Jean Harris Forester Green, age 88, of Henderson, peacefully passed away on October 17, 2019. Jean was born October 5, 1931, in Henderson. She grew up and graduated from Henderson High School in 1947. She attended the University of Texas in Austin and graduated in 1953 with a Bachelors Degree in English. While attending UT, she met and later married Tom Forester. They eventually settled in Henderson where they raised their family. Jean worked alongside her father in the family business, Harris Printing and Stationery Company, as a formidable saleswomen until she retired. Jean was a faithful member of St. Matthew's Episcopal Church, a loving wife, mother, and a doting "Grammy". She had an insatiable appetite for traveling, scrapbooking, and sweepstaking, as well as a highly refined taste for chocolate candy, hot rolls with lots of butter, iced tea with extra lemon, and Blue Bell Homemade Vanilla Ice Cream! Several years after the sudden loss of Tom in 2000, Jean met Burke Green. Together, they found companionship in each other and were married in 2006. Jean was preceded in death by her husband of 46 years, Tom Forester. Her parents, Randy and Virginia Harris, sister, Dorothy Nash, brother-in-law, Joel Nash, and great-grandsons, Greyson Cole Bagley, and Nathan Grey Bagley also await her. With beautiful memories to cherish, Jean leaves husband Allen Burke Green, daughter, Joanne and Bill Bagley of Henderson, and son, Robert and Kerri Forester of Pampa. She also leaves 6 grandchildren: Charlie and Alison Bagley of San Antonio, Scotty and Lana Bagley of Plano, Natalie and Taylor Lemons of Tyler, Emily and Carl Coulter of Tyler, Julianna Forester and Ayush Risal of San Antonio, and Katie Beth and Cager Osborne of Fort Worth, as well as four great-grandsons, Jack and John Bagley and Caleb and Casey Bagley. Also treasuring Jean's memory is Janie and John Dickerson of Kilgore, Ruth Ann and Jerry Camp of Kilgore, niece, Elinor and Pete Seeley of Dallas, and nephew, John and Jenifer Nash of Houston, along with their families. The family wishes to express their sincerest appreciation to the nursing staff of Autumn Leaves, Angel Care Hospice - Leslie King, Linda Rohan, Arline Beauchamp and Melissa Smith. Funeral services to celebrate the life of Mrs. Jean Harris Forester Green will be held on Saturday, October 19, 2019 at 10:00 am at St. Matthew's Episcopal Church with Reverend Patsy Barham officiating. Pallbearers will be her grandsons, Charlie Bagley, Scotty Bagley, Taylor Lemons, Carl Coulter, Cager Osborne, and Ayush Risal. Internment will follow in Lakewood Memorial Park Cemetery under the direction of Crawford-A. Crim Funeral Home of Henderson. Visitation will be from 5:00 - 7:00 p.m., Friday, Oct. 18, 2019 at the funeral home. Memorials may be made to the St. Matthew's Episcopal Church Memorial Fund, 214 College Avenue, Henderson, Texas 75654. Words of comfort may be shared with the family at www.crawfordacrim.com.

Jean Harris Forester Green, age 88, of Henderson, peacefully passed away on October 17, 2019. Jean was born October 5, 1931, in Henderson. She grew up and graduated from Henderson High School in 1947. She attended the University of Texas in... View Obituary & Service Information

The family of Mrs. Jean Forester Green created this Life Tributes page to make it easy to share your memories.