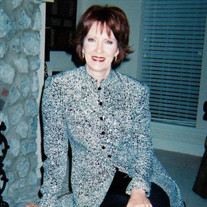 Graveside services for Ms. Jean Bassett, 80, of Tyler, formerly of Henderson, will be held at 11:00 a.m. on Saturday, October 16, 2021, at Millville Cemetery. Interment will follow under the direction of Crawford-A. Crim Funeral Home. The family will receive friends following the graveside service, at 12:00 p.m. on Saturday under the pavilion next to Millville Baptist Church. Ms. Bassett passed from this life on October 12, 2021, at Christus Trinity Mother Frances in Tyler. She was born March 9, 1941, in Henderson to the late Joseph Lloyd and Charlcye (Gilliam) Bassett and was raised in Henderson. She moved to the Tyler area in the early 1980s. Jean worked for several years for Aramis Men’s Cologne and later became a realtor and retired from Perry Hall Homes. She was a member of Green Acres Baptist Church in Tyler and loved her church. She enjoyed spending time with her family and adored her grandchildren. In addition to her parents, she was preceded in death by her sister, Ann Nell Bassett. Survivors include her son, Blake Ballenger and wife Debbie of the Stewart Community; daughter, Kelli Ballenger of Henderson; the father of her children, Dan T. Ballenger of Henderson; grandchildren, Leigh and Layn Ballenger; great-granddaughter, Kalia Richardson; sisters, Patsy Ann Standard of the Houston area, Dorothy Bassett VanSickle of Mesquite, Carolyn Kay Helton of Henderson, and Nita Joyce Reese and husband Mike of Henderson; brother-in-law, Michael Reece; as well as a host of nieces, nephews, other family and friends. In lieu of flowers, memorial donations may be made to Green Acres Baptist Church, c/o Stewardship Office, Green Acres Baptist Church, 1607 Troup Hwy., Tyler, TX 75701 or online at gabc.org/give, and/or the organization of your choice. Words of comfort may be shared with the family at www.crawfordacrim.com.

Graveside services for Ms. Jean Bassett, 80, of Tyler, formerly of Henderson, will be held at 11:00 a.m. on Saturday, October 16, 2021, at Millville Cemetery. Interment will follow under the direction of Crawford-A. Crim Funeral Home. The... View Obituary & Service Information

The family of Mrs. Jean Bassett created this Life Tributes page to make it easy to share your memories.