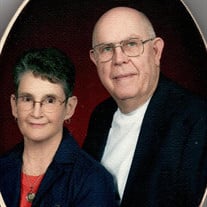 Private family services for Ms. Janice Spencer, 85, of Henderson, will be held at First Baptist Church with Dr. David Higgs officiating. Interment will follow at Ebenezer Cemetery in Arp under the direction of Crawford-A. Crim Funeral Home. In lieu of a traditional visitation, a register book will be available from 8:00 a.m. to 5:00 p.m. Thursday, thru Sunday at the funeral home for family and friends to come by and pay their respects. Ms. Spencer passed away December 1, 2020, at Hospice Homeplace in Tyler. She was born June 28, 1935 in Roswell, New Mexico to the late Luther Cecil and Frances (Little) Tankersley. Ms. Spencer was a homemaker until later in life when she became the church secretary and then the pastor's secretary at Royal Palms Baptist Church in Phoenix, Arizona. She loved singing and playing the piano, as well as music overall. She was the Children's Choir Director at Royal Palms Baptist Church and assisted with children's choirs at First Baptist Church in Henderson, where she was a member. Ms. Spencer was an avid reader and could read all day. She was preceded in death by her parents, Luther and Frances Tankersley; and her husband of almost 57 years, Herb Spencer. Survivors include her children, Charles Spencer and wife Julie of Texarkana, Donald Spencer and wife Michele of Jefferson, Tracey Lopez and husband Pete of Henderson, Barry Spencer and wife Karen of Tucson, Arizona; brother, Bruce Tankersley and wife Sandra of Mesquite; sister, Joan Lewis of Farmington, New Mexico; fifteen grandchildren, fifteen great grandchildren, three great-great grandchildren; and a host of nieces, nephews, other family, and friends. In lieu of flowers, the family asks that you make a memorial contribution to First Baptist Church of Henderson at 207 W. Main St., Henderson, TX 75652, and/or Hospice of East Texas at 4111 University Blvd., Tyler, TX 75701. Words of comfort may be shared with the family at www.crawfordacrim.com.

Private family services for Ms. Janice Spencer, 85, of Henderson, will be held at First Baptist Church with Dr. David Higgs officiating. Interment will follow at Ebenezer Cemetery in Arp under the direction of Crawford-A. Crim Funeral Home. In... View Obituary & Service Information

The family of Ms. Janice Spencer created this Life Tributes page to make it easy to share your memories.