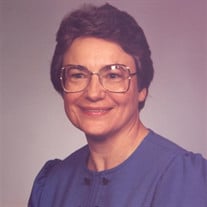 A celebration of the life of Mrs. Jane Dill, 80, of Henderson will be on January 2, 2016 at 2:00 pm at First Presbyterian Church in Henderson with the Reverend Candice L. Klein officiating under the direction of Crawford-A. Crim Funeral Home. The family will receive friends following the service at the church. There will be a family gathering for a commital service at a later time at Henry's Chapel Cemetery, Troup, Texas. Jane Newton Dill moved into the nearer presence of the Lord on December 24, 2015. She was born April 17, 1935 in Canadian County, Oklahoma to Harvey Newton and Ollie Gaubert Newton. For her first eight years in school she attended the small Cashion, Oklahoma School northwest of Oklahoma City. Her family moved to a farm near her father's home place in the county near Star City, Arkansas and she attended Star City High School for grades nine through twelve. She was Valedictorian of the class of 1953. She was baptized as a child in the Methodist Church in Cashion and then became a member of the Presbyterian Church after their move to Arkansas. She attended Bethel College, a small liberal arts school in McKenzie, Tennessee, and prepared to be a teacher of English. She and her husband, Tolbert Dill met there and were married March 19, 1955 at the Cumberland Presbyterian Church in Pine Bluff, Arkansas. Her father-in-law, the Rev. H.E. Dill was the minister at the wedding. She is survived by two children, Michael Charles Dill of Henderson, and Diane Marie Dill of Lincoln, Illinois, and two grandchildren, Courtney Lanham of Lubbock, Texas and Aubrey Lanham of Las Cruces, New Mexico. Her mother, Ollie Newton is still living in a retirement facility in Marietta, Georgia. Jane was the oldest of five children. Her brother, Al Newton, of Spring, Texas died recently. Her sister, Dean Barber, lives in Powder Springs, Georgia, near Atlanta and looks after their mother. Her sister, Marie Middleton, also lives in the Atlanta area and brother, Jerry Newton, lives in Fort Payne, Alabama. the Dills lived in a number of places since Rev. Dill served as a pastor or in church administration in various locations. Some of those were: Kansas City, Missouri, Japan, Memphis, Tennessee, Denton, Texas, Chattanooga, Tennessee, Olney, Texas, Lebanon, Tennessee, Marlow, Oklahoma, Apache, Oklahoma, Oklahoma City, Oklahoma, and Mangum, Oklahoma. When they moved to Denton in the late 1960's she became a special education teacher and earned accreditation for that at Texas Womens University in Denton. After that she taught as a special education teacher wherever they moved and retired in 1996 when they moved to Oklahoma City. The Dills moved to Henderson in June 2000 so they could be near their daughter, Diane and granddaughters Courtney and Aubrey. Jane and their son Michael became active in First Presbyterian Church, Henderson. Rev. Dill served as pastor of two United Methodist Churches at Carlisle and Henry's Chapel for the next seven years. After Diane and her family moved to New Mexico, Jane and Michael became members of the Carlisle United Methodist Church and helped in various ways in that ministry. More recently she has served as an elder of First Presbyterian Church in Henderson and she and Rev. Dill both attended that church. While she served as Elder she was chair of the worship task force and helped in planning for worship services. In 2013 she had to be hospitalized with a life-threatening illness and then since late 2014 she has been under hospice care with Angel Care Hospice. She has continued to be a great blessing to her family and friends and has received loving care, prayers and concerns from many. The family wishes to thank the Rev. Candice Klein and the loving people of First Presbyterian Church, the people of Angel Care Hospice and Dr. Brenda Vozza-Zeid. In lieu of flowers memorials may be made to First Presbyterian Church at P.O Box 773, Henderson, TX 75653 or the charity of your choice. Words of comfort may be shared with the family at www.crawfordacrim.com.

A celebration of the life of Mrs. Jane Dill, 80, of Henderson will be on January 2, 2016 at 2:00 pm at First Presbyterian Church in Henderson with the Reverend Candice L. Klein officiating under the direction of Crawford-A. Crim Funeral Home.... View Obituary & Service Information

The family of Mrs. Jane Dill created this Life Tributes page to make it easy to share your memories.

A celebration of the life of Mrs. Jane Dill, 80, of Henderson...