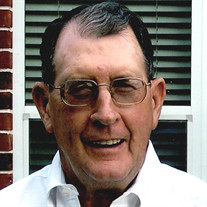 James Thurston Christian, Jr. was born in Rusk County on August 31,1938, to James Thurston and Shirley Dair Latham Christian. He went home to be with his Lord on January 25, 2020, at Hospice of East Texas in Tyler. James attended the Crim’s Chapel School through the second grade then transferred to Henderson where he graduated from Henderson High School in 1956. He worked as a tool and die machinist for LeTourneau in Longview for 36 years before retiring. He enjoyed raising cattle, hunting, fishing and camping with friends. James served for many years on the Crim’s Chapel Cemetery board and was instrumental in organizing the Crim’s Chapel Volunteer Fire Department as a charter member. As a boy, he was baptized at Gene Rogers Lake in the Crim’s Chapel community. James was an ordained deacon serving at First Baptist Church of Crim’s Chapel and Forest Home Baptist Church. Greeting James in heaven are his parents, James Thurston and Shirley Dair Latham Christian and siblings Wayman Walter Christian, Hershel Dean Christian and Johnny Mack Christian. Celebrating James’ 81 years of life are his wife of 51 years, Judith Arlene Christian of Henderson, son and daughter-in-law Milton and Angie Christian of Henderson, daughter and son-in-law Jenny and Robert Floyd of Henderson, grandchildren Ashley and Sam Jones of Arp, Alaina and Kasey Newman of Henderson, Kyle Christian of Henderson, Ross Floyd of Henderson, and Philip Floyd of Henderson, along with many nieces, nephews, and extended family members. Funeral services for Mr. Christian will be held at 2:00 p.m. on Wednesday, January 29, 2020, in the chapel at Crawford-A. Crim Funeral Home with Bro. Tommy Marshall officiating. Interment will follow at Crim’s Chapel Cemetery under the direction of Crawford-A. Crim Funeral Home. The family will receive friends prior to the service from 12-2 p.m. on Wednesday, January 29, at the funeral home. Pallbearers will be Kyle Christian, Ross Floyd, Philip Floyd, Charles Gillis, Kevin Williams, and Craig Christian. Honorary pallbearers will be the deacons of Forest Home Baptist Church. In lieu of flowers, the family requests memorial donations be made in James’ name to Crim’s Chapel Cemetery Association, P.O. Box 1542, Henderson, TX 75653 or an organization of your choice. Words of comfort may be shared with the family at www.crawfordacrim.com.

James Thurston Christian, Jr. was born in Rusk County on August 31,1938, to James Thurston and Shirley Dair Latham Christian. He went home to be with his Lord on January 25, 2020, at Hospice of East Texas in Tyler. James attended the Crim&#8217;s... View Obituary & Service Information

The family of Mr. James Thurston Christian Jr. created this Life Tributes page to make it easy to share your memories.