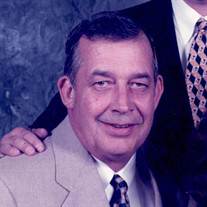 Funeral services for James Robert “Bob” Martin, 78, of Longview, will be held at 2:00 p.m. Wednesday May 20, 2020 at Crawford-A. Crim Funeral Home of Henderson with Pastor Edgar Ayala officiating. The family will receive friends from 1:00 p.m. to 2:00 p.m. at the funeral home. Interment will follow at Martin Cemetery in Tatum under the direction of Crawford-A. Crim Funeral Home. Bob was born to Glassell and Veta Fay Hunt Martin on December 10, 1941 and grew up in Tatum, Texas. At a young age he received the Lord Jesus Christ as Savior and was baptized. Out of High School, Bob went to work at Sears in Longview and met Dick Chick, owner of Dundee Angus Ranch. Mr. Chick sent Bob to Red River County to work on a ranch. There, Bob met Patsy LaJuan Clark and they were married in Bogata, Texas on February 6, 1964. In 1966, Bob was drafted into the United States Army and served a tour of duty in Germany. When discharged from the army, Bob became a journeyman carpenter, later taught the class, and served as President of the Local Carpenter’s Union. He worked for Bennett Cabinet Shop, Moore Bros. Lumber Company, then Texas Bank and Trust from 1979 to retirement in 2011. Bob was an AMBUC and served as President during the years the Amtryke was designed for children with disabilities. He was named AMBUC of the Decade in 1999. Bob liked to barbeque and he and AMBUC friends attended many cook-offs and fundraisers. He is survived by his wife, Patsy Martin of Longview; son, Robert Allen Martin of Fort Worth; sister, Ruth Evelyn Jimmerson of Longview; and a number of nieces and nephews. He was preceded in death by his parents and three sisters, Joy Sue Griffin, Betty Jo Cole, and Linda Fay Kelley. Honorary pallbearers will be AMBUCS friends, Randy Andrews, Felton Hopkins, Al Bingham, Albert Goettle, John Durst, and Billy Hagenbucher. In lieu of flowers, the family requests that donations be made to Pleasant Hills Children's Home P.O. Box 1177 Fairfield, TX 75840 or Longview AMBUCS PO Box 3092, Longview, TX 75606. Words of comfort may be shared with the family at www.crawfordacrim.com.

The family of Mr. James Robert "Bob" Martin created this Life Tributes page to make it easy to share your memories.