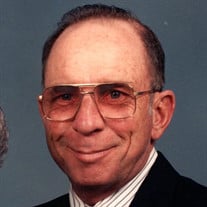 Graveside services for Mr. James L. “Jimmie” Chambless, 84, of Henderson, will be held at 10:00 a.m. on Tuesday, November 3, 2020, at Rusk County Memorial Gardens with Rev. Dwain Knight officiating. Interment will follow under the direction of Crawford-A. Crim Funeral Home. A register book will be available at the funeral home from Saturday until Tuesday during regular business hours for those that wish to extend condolences. Mr. Chambless passed from this life on Friday, October 30, 2020, at Hospice Homeplace in Tyler. He was born October 31, 1935, in Hamilton, to the late Verner and Lula (Lawson) Chambless and spent most of his life in Henderson. “Jimmie”, along with his father Verner, owned and operated Chambless Implement Sales and dealt in Ford tractors. He later held the position of Sanitation Superintendent with the city of Henderson and went on to retire from Rusk County Electric Co-Op. Mr. Chambless also served his country in the Army National Guard. Jimmie was a hard-working man, and in his spare time, he enjoyed yardwork and landscaping. He was a family-oriented man, a dedicated husband and father, and he so enjoyed spending time with his grandchildren. Mr. Chambless was most definitely a people person. He made friends easily and often and was well liked among his many friends and acquaintances. Jimmie was also a long-time member of the Henderson Church of Christ. In addition to his parents, he was preceded in death by his wife of 58 years, Joyce Chambless; infant twin sister, Verna Lu Nell Chambless; and sister, Judy Sprott. Survivors include his son, James Chambless and wife Carol of Kilgore; grandchildren, Blake Chambless and wife Lauren of Henderson, and Paige Bing and husband Rich of Hawkins; great-grandchildren, Kambrie Chambless of Henderson, Kaden Morrison and Kohen Bing, both of Hawkins; nephews, Jeffrey Sprott and Jeremy Sprott; niece, Joelle Yates; and a host of other family and many friends. The family would like to say a special word of thanks to Sydni Goode and Hospice of East Texas, Rachel Dessecker, Judy Washington, and Tracie Washington for all of their time, attention, love and care afforded to Mr. Chambless. In lieu of flowers, memorial donations may be made to Hospice of East Texas at 4111 University Blvd., Tyler, TX 75701. Words of comfort may be shared with the family at www.crawfordacrim.com.

The family of Mr. James L. "Jimmie" Chambless created this Life Tributes page to make it easy to share your memories.