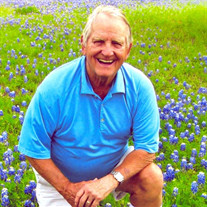 Graveside services for Mr. James E. Carroll, 86, of Dallas, formerly of Emerald Bay, will be held at 11:00 a.m. on Saturday, November 10, 2018, at Lakewood Memorial Park with Rev. Jerry Newman and Rev. Doyle Sumrall officiating. Inurnment will follow under the direction of Crawford-A. Crim Funeral Home. A celebration of James' life will follow at 5:00 p.m. at Emerald Bay Community Church in Bullard with Dr. Darryle Dunks and officiating. James was born November 24, 1931, in Fort Worth, Texas. He was the youngest son of Mittie and T.D. Carroll. His father was a graduate of Southwest Seminary in Fort Worth. The family moved to Henderson, Texas in 1935, when T.D. accepted the position of Minister of Music at the First Baptist Church in Henderson. James attended and graduated from the Henderson High School system in 1950. Excelling in sports, James was captain of the track and field team which won the district championship that year. After graduation from high school, James went to Baylor University on a track scholarship. He also played freshman football and made many lifelong friends on that team. He graduated from Baylor in 1954 and then spent two years in the US Army in Alaska. He was honorably discharged and used the GI Bill to attend the University of Texas at Austin where he attained his law degree. At that time, he also worked for the Texas Court of Criminal Appeals. He then moved to Houston where he served as Assistant District Attorney. During this time he was married and started a family with Joyce Carroll. James used his law degree in several business ventures and later worked as a business advisor. After the death of his second wife Madelyn Carroll, Jim moved back to East Texas to be near his family and settled in Emerald Bay on Lake Palestine. James was an avid sports fan and played golf until his death. His most memorable day was when he beat the club pro from the blue tees at age 79. He was also a senior and super senior club champion at Emerald Bay Club. James is survived by his beautiful and devoted wife Glynda. They were married in Santa Fe, New Mexico on May 23, 2009, and enjoyed their retirement years in Emerald Bay. He is also survived by his oldest son James who lives in Dallas, daughter Kimberly and husband John Houser from Liberty Hill, and youngest son Ben and wife Laurel from Logo Vista. In addition there are four grandchildren, John Michael, Matthew, Kristina and David, and three great-grandchildren Levi, Abram and Waylon. From whom he referred to as a second family are Glynda's daughters, Shelley and Laura, their husbands Dave and Gary, grandchildren Paige, Claire, Grace, Miller and great-grandchild, Wesley. One of the greatest joys of Jim's life was his prison ministry at Bradshaw prison in Henderson in his later years. He would go each week sharing the good news of Jesus Christ. He would sing the ole hymns, and personally fellowship with each one about what it took to be saved. He gave away thousands of bibles to guide them and personally witnessed to them about how to walk with Jesus. At the end of each month, he would have Victory Day celebrating all those getting their "ticket to Heaven" by accepting Jesus as their savior. Today Jim is singing and praising his Lord, face to face, while holding his first little girl, Jan. Words of comfort may be shared with the family at www.crawfordacrim.com.

The family of Mr. James E. Carroll created this Life Tributes page to make it easy to share your memories.