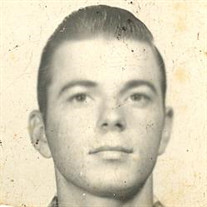 A private family graveside for Mr. Jackie Parker will be held 10:00 a.m., Monday, Jan. 28, 2019 at Pine Hill Baptist Cemetery, with interment under the direction of Crawford - A. Crim Funeral Home of Henderson. Mr. Parker passed away Tuesday, Jan. 22, 2019 at UT Health Henderson. He was born Jan. 8, 1940 in Henderson to the late Hopson and Lucille Parker. He had worked 25 years at Sadler's in Henderson. In addition to his parents, he was preceded in death by his brothers, Jimmy and Bobby Lee Parker; sisters, Pansy Hudson, Peggy Hudson, Billie Humphrey, and Patsy Parker. Survivors include: nephews, Jason Parker of New London, and Terry Harrison of Kilgore; brother, Larry Parker of Price; close friends, Josh and Tanya Warner, Myah Warner, and Madison Hughes, all of Henderson, and was a god-father to Landon Hughes. Condolences may be made at www.crawfordacrim.com.

The family of Mr Jackie Parker created this Life Tributes page to make it easy to share your memories.

A private family graveside for Mr. Jackie Parker will be held...