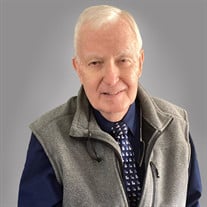 Jack Riley Hale was born in Houston, Texas on February 27, 1945 and left this earth for his heavenly home on April 20, 2022. In those 77 years, Jack never strayed from the solid Christian upbringing instilled by his parents, Errette Morgan Hale and Vivian Dudley Hale. Before Jack was two years old, the Hale family moved to Henderson where Jack attended school all twelve years, graduating from Henderson High School in 1963. While at HHS, he participated in basketball, track, band, mixed chorus, was Best All-Round Nominee and selected as Who’s Who in Mathematics. He continued his education at Kilgore College and the University of North Texas graduating in 1967 with a Bachelor of Science Degree and later received a Master of Education from the University of Houston. He also earned his administrator certification from Stephen F. Austin. On August 20, 1967, Jack married Paula Propes Hale, his high school sweetheart; and they began a life together of service to young people through education. Jack taught math and coached in Brazosport ISD for 9 years before returning to East Texas and settling in White Oak in 1976. While at White Oak, Jack served as high school counselor, elementary principal, curriculum director, superintendent, and closed out his 41 years at White Oak ISD as high school counselor for the second time because he wanted to work with the students. While at White Oak, Jack epitomized what it means to be a Roughneck. He was a yell leader at pep rallies and attended as many programs and activities as possible to support the students. Due to his overwhelming love and work for the school, the choral music building was named in his honor in October of 2008. In the fall of 2019, he received an oil derrick dedication for his service to the school and community. In addition to his work in the field of education, Jack was known for his faithfulness to God and service to his church. He was active in the music ministry at White Oak Baptist Church for many years and the past eight years he has regularly attended Pine Tree Church of Christ. His two strokes on April 8 were a shock to everyone, but were perhaps God’s merciful way of protecting him from the pain that was expected with prolonged cancer. Beyond all of his professional and Christian areas of service, Jack’s love for his family was his most obvious testimony to all who knew him. In their 54 years of marriage, he and Paula have been loving parents to Jarrett Hale (Cynthia) of Rockwall, Jeffrey Hale (Marsha) of Dallas, Justin Hale (Robin) of St. Louis, and Jaxon and Dex Hale of White Oak. He was also a proud grandfather (Pops) to Olivia, Casey, Kathryn, Jane, and Cody Jack Hale. In addition, he is survived by his brother Jerry Hale (Toni) of Henderson, niece Marla Sullivan (Mike) of Hallsville, sister-in-law Pam Dean of Richardson, niece Mary Beth Ort (Rusty) of Richardson, and several great-nieces, great-nephews, and cousins. The Hale family wishes to thank the medical staff of MD Anderson, Texas Oncology, UT Health Tyler, The Hospice of East Texas Home Place, White Oak ISD, the church families of White Oak Baptist Church and Pine Tree Church of Christ, and the entire White Oak community for their love and support during the illness and recent home-going of Jack Riley Hale. Words of comfort may be shared with the family at www.crawfordacrim.com. A family visitation will be held on Friday, May 6, at Pine Tree Church of Christ from 4 - 6:30 pm. A memorial service to honor and celebrate a faithful life will be held Saturday, May 7, at Pine Tree Church of Christ at 3 pm. The memorial service will be officiated by Jody Garner, Ritchie Hamm, and Michael Heim. In lieu of flowers, donations may be made to the White Oak Education Foundation, PO Box 797 White Oak, TX 75693.

Jack Riley Hale was born in Houston, Texas on February 27, 1945 and left this earth for his heavenly home on April 20, 2022. In those 77 years, Jack never strayed from the solid Christian upbringing instilled by his parents, Errette Morgan... View Obituary & Service Information

The family of Mr. Jack R. Hale created this Life Tributes page to make it easy to share your memories.