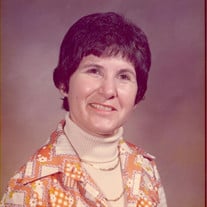 Graveside services for Icy I. (Faye) Layne, 94, of Henderson, will be held at 4:00 p.m., Monday, Feb. 20, 2017 at Lakewood Memorial Park with Pastor Glen M. Ketchum officiating. Interment will follow under the direction of Crawford-A. Crim Funeral Home of Henderson. The family will receive friends from 5-7 p.m., Sunday, Feb. 19 at the funeral home. Ms. Layne passed away at her home in Henderson on Saturday, February 18, 2017. She was born June 1, 1922 in Guymon, Oklahoma to the late Albert Dale Worley and Nancy Jane Parrish Worley. She married Aubrey O. Layne on November 7, 1942. She was a homemaker and later worked at M.E. Moses. She attended Calvary Assembly of God Church. In addition to her parents, she was preceded in death by her husband of 53 years, Aubrey O. Layne; two brothers, Charles Worley and Sammy Worley, and two sisters, Vicy Worley Fleet and Oma Worley Layne. She is survived by: sons, Albert (Gene) Layne of Henderson, A.L. Layne and wife Carolyn of Henderson; her grandchildren, Alan Layne of Henderson, Stacie Layne Virden and husband Ryan of Waco, Gena Layne Doss and husband Scott of Kyle, Pamela Layne Gregory and husband Steven of Henderson, and Mark Layne of Henderson; also five great-grandchildren, Rhett, Reef, and Roxli Doss of Kyle, Laynie McKinney of Henderson, and Andrew Virden of Waco. In addition to these, she leaves behind many cherished family and friends. Special thanks to Randi Cowger, Debbie Monroe and Angelia Dunams for your friendship and care of our Mother, and to Angel Care Hospice for your care during her last weeks. In lieu of flowers, memorial donations may be made to the charity of your choice. Honorary pallbearers will be members of the Clinton Lodge No. 23 A.M. & A.F. and the Rusk County Sheriffs Office. Words of comfort may be shared with the family at www.crawfordacrim.com.

Graveside services for Icy I. (Faye) Layne, 94, of Henderson, will be held at 4:00 p.m., Monday, Feb. 20, 2017 at Lakewood Memorial Park with Pastor Glen M. Ketchum officiating. Interment will follow under the direction of Crawford-A. Crim Funeral... View Obituary & Service Information

The family of Mrs. Icy I. (Faye) Layne created this Life Tributes page to make it easy to share your memories.