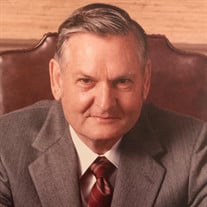 Howard R. Hall 92, of Henderson passed from this life on Wednesday, September 16, 2020 at Henderson Hospital. He was born November 12, 1927 in Asheville, North Carolina to the late Ora Lyndon and Frances Isabella Hall. He was a dedicated husband, father, grandfather, great-grandfather and friend. After graduating from Henderson High School, he enlisted in the US Navy where he served his country on the aircraft carrier USS Boxer in WWII. In 1950 he married the love of his life, Mary Elizabeth Odom and they recently celebrated 70 years together in February of this year. He was originally employed in the family business, Hall Manufacturing, founded by his father, making church furniture and pews. As an entrepreneur, Howard founded Fiberglass Specialties in 1962. The company grew to become the largest producer of fiberglass church baptistries, steeples and cupolas in the country. He also founded Swirl-Way, a manufacturer of spas and whirlpool bathtubs that were sold throughout North and South America. In 1989 he sold the companies and began his active retirement. He traveled extensively with his wife Elizabeth, touring numerous countries around the world. He was an avid pilot and enjoyed flying his planes. He enjoyed photography and was a life-long master woodworker. He passionately crafted furniture and gifts for his family and made beautiful, intricate canes that he gave to his friends who needed them. Always an outdoorsman, he had a love of hunting, fishing and camping with his family, and was once an avid beekeeper. In his later years he prided himself on remembering the name of everyone he met as a fun game for himself and to keep mentally sharp. Howard was the patriarch of a large family and was affectionately known as “PawPaw”. He was preceeded in death by his sister Helen Hall Patrick, and his brothers Watson, Ray and Marvin Hall. He is survived by his wife Elizabeth Hall of Henderson, daughter Karen Acheson of Lindale, son Roy (Kathy) of Henderson, daughter Jena Newton (Johnny) of Henderson, daughter Melissa Alexander (Glenn) of Fulton, California, son Kelly (Beverly) of Henderson, and son Rocky (Tricia) of Henderson. Grandchildren include D’sha Aubry (Sam) of St. Die’ France, Camille Acheson of Austin, Trenton (Rachel) Hall of Spring Branch, Corby (Sandra) Hall of Henderson, Aleesa (Denis) Morris of Sulphur Springs, Jeremy (Tera) Newton of Rowlett, Dustin Alexander of Ft. Worth, Chelsea (Austin) Hawley of Healdsburg, California, Kayla (Russell) Mann of Frisco, Kylie (Rex) Mann of Southlake, Kamryn (Cody) Jones of Henderson and Austin Hall of Henderson. His great-grandchildren include Benjamin, Timothee and Raphael Aubrey of St. Die’ France, Sam, Lilly, Benjamin and Luke Hall of Spring Branch, Reed and Levi Hall of Irvin, Cadence Michael of Rowlett, Gracelyn and Karis Morris of Sulphur Springs, Emilia and Hayes Hawley of Healdsburg, California, Presley and Berkley Mann of Frisco, Malley, Macy and Mark Mann of Southlake, Collier Jones of Henderson, and Kaylee Hall of Henderson. Friends and family are invited to pay their respects on Friday, September 18, 2020, at Crawford-A. Crim Funeral Home between the hours of 8:00 AM and 5:00 PM. A register book will also be available to sign throughout the week at the funeral home. A private family service will be held under the direction of Crawford-A. Crim Funeral Home. Pallbearers will be Louis Hall, James Hall, Dr. Paul Patrick, Trenton Hall, Corby Hall, Austin Hall, Jeremy Newton, Dustin Alexander. As a longtime member of First Baptist Church and a devoted Christian, Honorary Pallbearers will be his FBC Sunday School Class along with John Arledge, Farrell Dorsey, and Jack Turner. For those not able to attend the service, a link is provided here https://remotecounsel.com/zoom/meeting/MTEyODE1. Words of comfort may be shared with the family at www.crawfordacrim.com.

Howard R. Hall 92, of Henderson passed from this life on Wednesday, September 16, 2020 at Henderson Hospital. He was born November 12, 1927 in Asheville, North Carolina to the late Ora Lyndon and Frances Isabella Hall. He was a dedicated husband,... View Obituary & Service Information

The family of Mr. Howard R. Hall created this Life Tributes page to make it easy to share your memories.

Howard R. Hall 92, of Henderson passed from this life on Wednesday,...