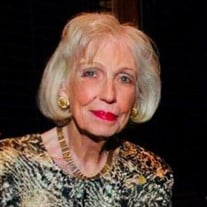 On Friday, February 5, 2021, Hazel Deason Carroll, age 91, was welcomed into heaven by her Lord and Savior, Jesus Christ. Hazel was born in Henderson, Texas on January 6, 1930, and was the proud daughter of Daniel Forrest and Bennie West Deason. She graduated from Henderson High School and enrolled at Southern Methodist University where she earned a Bachelor of Fine Arts degree in Speech and Theatre. Hazel was married to her high school sweetheart, Billy White Carroll for almost 65 years and was the loving mother of three sons: Dan, John and Don. Hazel taught at White Oak and Gaston ISD before beginning her almost 40 years of service to Henderson ISD. One of her first duties was obtaining certification in speech and language pathology in order to continue a newly established program in the district. Carroll directed this program for several years. Her work in this area is what she was most proud of. When Henderson was chosen as a pilot school by the Texas Education Agency for a program for children with disabilities, commonly called Special Education, Hazel was asked to lead the development of that program. During this time, she attended SFA and in 1962 received her Master’s in Elementary Administration and Speech. In 1973 she became curriculum director for HISD and after two years assumed the role of assistant superintendent, a position she held until her retirement in 1998. While serving in her various roles, she also served in statewide positions. She was a team member for TEA’s School Improvement Initiative that worked to evaluate school districts and their programs across the states, and worked with the Southern Association Accreditation Committee that accredits local school systems throughout the southern half of the U.S. Hazel was actively involved in a number of professional organizations throughout her career. These include the Texas State Teachers Association, Texas Association of School Administrators, Association for Supervision and Curriculum at the local, state and national levels, the Association of Speech and Hearing Association and Texas Speech Language and Hearing Association. In addition to her professional organizations, she was very active in numerous local civic groups as well. The Henderson Woman’s Forum, Henderson’s Woman’s Club, Varied Arts Club and Delta Kappa Gamma, an organization for women in education, were all important parts of her service to her hometown. She was very active in Henderson’s First Baptist Church, serving on numerous committees in many leadership positions and teaching Sunday School for many years. Hazel was known for her patience, courtesy and unquestioned professionalism. She truly believed in every teacher and student and her only goal was to make them the best that they could be. In 2014 Hazel was named Distinguished Alumni by The HISD Alumni Association. Hazel is preceded in death by her mother and father, Bennie West Deason and Daniel Forrest; husband, Billy White Carroll; sons, Dan Carroll and John Carroll; sister, Mary Street; and brother, Don Deason. She is survived by her son and daughter-in-law, Don and Holly Carroll and their daughters, Blynn & Emily Austin along with many nieces, nephews, family and friends. Graveside services for friends and family will be held on Tuesday, February 9, 2021 at 3 p.m. at Lakewood Memorial Park in Henderson, Texas under the direction of Crawford-A. Crim Funeral Home, Dr. Doyle D. Sumrall officiating. Honorary Pallbearers will be Kenny Morris, Jim Pendergrass, Jess Pendergrass, Brian McFarland, Jamie Carroll, Cliff Hurt Jr., Craig Hurt and Dana Deason. In lieu of flowers, please make donations to the Henderson ISD Alumni Association at www.hendersonisd.org/page/alumni in honor of Hazel. Words of comfort may be shared with the family at www.crawfordacrim.com.

On Friday, February 5, 2021, Hazel Deason Carroll, age 91, was welcomed into heaven by her Lord and Savior, Jesus Christ. Hazel was born in Henderson, Texas on January 6, 1930, and was the proud daughter of Daniel Forrest and Bennie West Deason.... View Obituary & Service Information

The family of Mrs. Hazel Deason Carroll created this Life Tributes page to make it easy to share your memories.