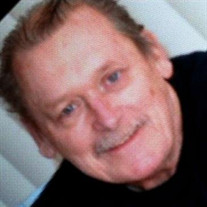 Graveside services for Mr. Harvey Ray Stanley Sr., 78, of Mt. Enterprise, will be held at 11:00 a.m. on Thursday, January 4, 2018, at Lakewood Memorial Park with Rev. Joe Orr officiating. Interment will follow under the direction of Crawford-A. Crim Funeral Home. Mr. Stanley passed from this life on December 27, 2017, at ETMC in Henderson. He was born October 23, 1939, in Gary, Indiana to the late Jesse and Thelma (Smith) Stanley and has resided in Mt. Enterprise since 2011, previously making Knox, Indiana his home. After graduating from high school, Harvey joined the United States Air Force and went on to an honorable career in Air Force Intelligence, serving over 21 years. He went on to work for and later retired from Safeway in Bullhead City, Arizona, after his military career. Mr. Stanley was a man of many talents. He was a gifted singer, as well as his love for woodworking and restoration. Harvey enjoyed gardening and was an avid animal lover. He loved the outdoors. One of his other skills was cooking and he got great joy out of sharing that knowledge with his children. He was a wonderful provider. Mr. Stanley grew up as a part of the Lutheran denomination and later became affiliated with the Southern Baptist Church. In addition to his parents, he was preceded in death by his wife Sharon Stanley. Survivors include his children, Lorna M. Byler and husband Rueben of Mt. Enterprise, Ann Transue of Mt. Enterprise, Michael J. Stanley and wife Barbara D. Stanley of Cisco, William Dean Stanley and wife Rhonda G. Stanley of Golden Valley, Arizona, Harvey Ray Stanley Jr. of Ft. Mohave, Arizona, Donald W. Stanley and wife Ericka Stanley of Holualoa, Hawaii, and Robert J. Stanley and wife Kathleen Stanley of Las Vegas, Nevada, sisters Betty C. Murphy of California, Beverly Arlene Landingham and husband Larry Dean of California, and Karen Orange of San Angelo, and many, many grandchildren, great-grandchildren and other family. Words of comfort may be shared with the family at www.crawfordacrim.com.

Graveside services for Mr. Harvey Ray Stanley Sr., 78, of Mt. Enterprise, will be held at 11:00 a.m. on Thursday, January 4, 2018, at Lakewood Memorial Park with Rev. Joe Orr officiating. Interment will follow under the direction of Crawford-A.... View Obituary & Service Information

The family of Mr. Harvey Ray Stanley Sr. created this Life Tributes page to make it easy to share your memories.