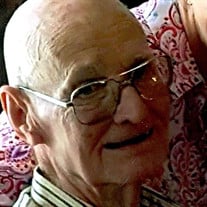 Graveside services for Mr. H.H. "Bo" Linthicum, 88, of New Salem, will be held at 2:00 p.m., Tuesday, November 17, 2020 at New Salem Cemetery with Luke Smith officiating. Interment will follow under the direction of Crawford-A. Crim Funeral Home. A register book will be available for friends to sign from 8:00 a.m. to 5:00 p.m. Monday November 16, 2020 at the funeral home. Mr. Linthicum passed away November 14, 2020, at UT Health in Henderson. He was born October 25, 1932 in New Salem to the late John Hollis and Pearlie Mae (Costlow) Linthicum. He was a 1951 graduate of Henderson High School. Mr. Linthicum served his country in the United States Air Force. On September 14, 1951 he married the love of his life, Mary Elizabeth "Beth" Compton. He moved to Houston in 1955 and worked as a control room operator for Rohm & Haas Chemical Plant. In 1974, he and his family moved back to New Salem where he became a rancher and farmer. He was a member of BBA and several other Cattle Associations. He was a faithful member of the New Salem Church of Christ, Highway 79 Church of Christ in Henderson, and Southside Church of Christ in Jacksonville. He was preceded in death by his parents, John Hollis and Pearlie Mae Linthicum; his wife, Beth Linthicum; brothers, Wayne Linthicum, Barney Linthicum; sister, Syble Ham; and son, Michael Linthicum. Survivors include his daughter, Jo Harshaw; grandchildren, Eric Harshaw, Matthew Linthicum and wife Tammy, Kelley Linthicum Speer and husband Adam, Elizabeth Linthicum; great-grandchildren, Brooke Linthicum, Bridgett Linthicum, Bo Bryce Holland, Waylon Speer, Garrison Speer; sister, Lou Nell Alexander; and numerous nieces, nephews, other family and friends. Words of comfort may be shared with the family at www.crawfordacrim.com.

The family of Mr. H.H. "Bo" Linthicum created this Life Tributes page to make it easy to share your memories.