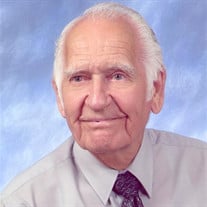 Funeral services for Mr. Gyp Hampton, 88, of Henderson, will be at 2:00 p.m., Wed. March 21, 2018 at Crawford - A. Crim Funeral Home chapel with Bro. Bob Payne and Bro. Leroy Sedgwick officiating. Interment will follow at New Hope Cemetery under the direction of Crawford - A. Crim Funeral Home of Henderson. Visitation will be from 5:00-7:00 p.m., Tuesday, March 20, 2018 at the funeral home. Mr. Hampton passed away Monday, March 19, 2018 at Autumn Leaves in Henderson. He was born in the Chicken Feather community of Rusk County on July 1, 1929 to the late George Henry and Annie Florence (Watson) Hampton. Gyp worked as an appliance repairman for United Furniture (later United Service and Repair) until he was 83, at which time he retired and loved to spend time chopping wood. He was a faithful member of the South Main Church of Christ, where he was recognized by all as a man of knowledge and love of the Word of God. In addition to his parents, he was preceded in death by his brothers and sisters, Bo Hampton, Ikey Neal, Richard Hampton, and Vergil Miller Hampton. Survivors include: his wife of 69 years, Margaret Hampton; children, Andy Hampton, Wayne Hampton and wife Renee, and Becky (Hampton) Dyer and husband Steve, all of Henderson; five grandchildren, Stephen Hampton, Ashlee Henley and husband James, Alicia Cochran, Jonathan Fredenburg and wife Haylee, and Bonnie Fredenburg; seven great-grandchildren; and nephews, George and Kent Hampton. Pallbearers are Kerry Buckner, Jonathan Fredenburg, Stephen Hampton, James Henley, George Hampton, and Kent Hampton. Condolences may be made online at www.crawfordacrim.com.

The family of Mr. Gyp Hampton created this Life Tributes page to make it easy to share your memories.

Funeral services for Mr. Gyp Hampton, 88, of Henderson, will...