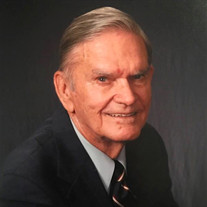 Funeral services for Mr. Guy Whitaker, 89, of Henderson will be at 11:00 a.m., Saturday, April 21, 2018 at Crawford - A. Crim Funeral Home with Dr. David Higgs officiating. Interment will follow at Lyles-Sanders Cemetery under the direction of Crawford - A. Crim Funeral Home of Henderson. Family will receive friends from 10:00-11:00 a.m., one hour before the service. Guy Whitaker, 89, of Henderson, Texas was granted his angel wings on April 19, 2018, at his home with his family by his side. Mr. Whitaker was born Dec. 22, 1928 in Lilbert, Tx to the late N.L. and Mae (Self) Whitaker. He attended Cushing High School in Cushing, Texas where he met his high school sweetheart and wife of 67 years, Elizabeth. Following high school he attended college at Stephen F. Austin State University in Nacogdoches,Texas where he played basketball. His teammates called him “Cush” his Freshman year before being promoted to the nickname “Whittaker Chambers” the following year. After graduating college he served in the United States Army during the Korean War. He spent 36 years as a coach, principal, and then superintendent at Eldorado,Texas public school district and devoted a total of 39 years in public education influencing hundreds of students, teachers, and parents along the way, and was a member of the Retired Teachers Association. Guy was a member at First Baptist Church of Henderson where he was a deacon. He was also a member of the Kiwanas Club, and the Lion's Club for 35 years. He loved spending time with his family, friends and hunting and fishing on the Pecos River. In addition to his parents, he was preceded in death by his three brothers, Chester, Leroy, and David Whitaker. Survivors include his wife of 67 years, Elizabeth Whitaker of Henderson; son, Lynn Whitaker and wife Stacie of Gladewater; daughter, Lori Tabb and husband Vance of Dawson; sister, Vera Nichols of Nacogdoches; five grandchildren, Coleton Whitaker Autumn Softley and spouse Chris Softley, Peyton Tabb, Preston Tabb, Erin Fitch and spouse Ryan Fitch and two great-grandchildren, Tatum Softley and Tyler Belle Softley. Pallbearers are Coleton Whitaker, Autumn Softley, Peyton Tabb, Preston Tabb, Erin Fitch, Ryan Fitch, and Chris Softley. Memorial contributions may be made to the First Baptist Church Children's Building Fund, 207 W. Main St., Henderson, Tx, 75654. Condolences may be made online at www.crawfordacrim.com.

Funeral services for Mr. Guy Whitaker, 89, of Henderson will be at 11:00 a.m., Saturday, April 21, 2018 at Crawford - A. Crim Funeral Home with Dr. David Higgs officiating. Interment will follow at Lyles-Sanders Cemetery under the direction... View Obituary & Service Information

The family of Mr. Guy Whitaker created this Life Tributes page to make it easy to share your memories.

Funeral services for Mr. Guy Whitaker, 89, of Henderson will...