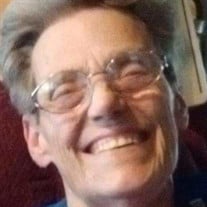 Funeral services for Mrs. Gracie Sammons, 70, of Henderson, will be held at 11:00 a.m., Monday, January 13, 2020, at Crawford - A. Crim Funeral Home chapel with Father Rusty Matheny officiating. Interment will follow at Shiloh Cemetery under the direction of Crawford-A. Crim Funeral Home of Henderson. Visitation will be from 9:00 a.m - 11:00 a.m., Monday, January 13, at the funeral home. Mrs. Sammons passed away Thursday, January 9, 2020, in Tyler. She was born May 20, 1949, in Big Spring, TX to the late William Howard and Gracie (McCarty) Jones. She lived most of her life in Rusk County, and was self-employed in the roofing business. She was a member of the Church of Christ. In addition to her parents, she was preceded in death by her husband, William Sammons; and two brothers, Donnie and Lonnie Jones. Survivors include: sons, William R. Sammons, Jr. of Henderson, and Joshua Allen Thomas, of Henderson, and daughters, Melissa K. Whitehead of Dallas, Georgia A. Sammons of Henderson, and Gracie E. Denton of Tyler; brother, Roy L. Jones of Yoakum, and sister, Barbara Sue Doyle of Evadell; 12 grandchildren, and 15 great-grandchildren. Pallbearers are Josh Sammons, Mariah Parnell, Joshua Thomas, Samuel Joiner, Anthony Burks, and Vernon Ralston. Condolences may be made at www.crawfordacrim.com.

The family of Mrs. Gracie Sammons created this Life Tributes page to make it easy to share your memories.

Funeral services for Mrs. Gracie Sammons, 70, of Henderson, will...