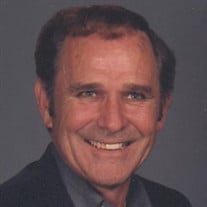 Graveside services for Mr. Gordon Reed, 86, of Henderson, will be held at 10:00 a.m. on Tuesday, August 10, 2021, at Duncan Cemetery with Pat Adams officiating. Interment will follow under the direction of Crawford-A. Crim Funeral Home. A register book will be available from 8 a.m. until 5 p.m. on Sunday, August 8, and Monday, August 9, for friends and family that would like to come by to sign the book and pay their respects. Mr. Reed passed from this life on August 6, 2021, at his residence. He was born April 21, 1935, in Roff, Oklahoma to the late Gordon Reed Sr. and Opal (Scott) Reed. Gordon graduated from Alva High School in Alva, Oklahoma and went on to earn a Bachelor of Science in Civil, Petroleum, and Gas Engineering from Oklahoma State University in Stillwater. He was also a member of the ROTC from 1953-1957. Mr. Reed went on to 38-year career as a Professional Engineer with stints at Exxon, Hunt Oil Co., Falcon Resources, and East Texas Saltwater and SCD Production. In his retirement, he enjoyed managing the farm and rental properties. Gordon was an avid sports fan and enjoyed coaching his son, David, and daughter, Dayna, in baseball and softball as well as being a high school football and basketball official. Mr. Reed thoroughly enjoyed watching his grandchildren in their various sports and rarely missed a game where he was an enthusiastic supporter. He was also a KLTV Weather Watcher for 27 years. Mr. Reed was a long-time member of First Christian Church. Gordon joined Rotary on October 1, 1984, and had 36 years perfect attendance. During his 36 years as a Rotarian, Gordon served as an Assistant District Governor, the Club President in 1998-1999, and the Club Treasurer as well as many different Director positions during his tenure. He supported the Rotary Foundation and was a Paul Harris Fellow +7 and was most recently the Rotarian of the Year for 2019-2020. Gordon always participated in every activity and event for the Rotary Club of Kilgore; Fish Fry, Shoe Project, Flag Project, Scholar Athlete Banquets, Dictionary Project, Golf Tournament and Trash Pick-up Project. In fact, he was the person who instigated the Trash Pick-up Project along Highway 259 between Kilgore and Pirtle. He was even awarded the TxDot Highway Beautification Award for this trash pick-up project. He was always at each event and worked tirelessly. To know Gordon was to love him, and he touched the lives of all that he met. He had a very special place in his heart for his children, grandchildren, and his beloved wife, Ruth. In addition to his parents, he was preceded in death by his sister, Winona Frazier. Survivors include his wife of 37 years, Ruth Reed of Henderson; children, Debra Weiss and husband Ron of Ellisville, Missouri, David Reed and wife Miriam of Conroe, Diane Carnes and husband Craig of Tyler, Dayna Westbrook and husband Steve of Nacogdoches, Cindy Broadway and husband Rodney of Henderson, and Larry Kee and wife Ruby of Henderson; sister, LaJean Bergren of Keller; grandchildren, Jill, Bonnie, Jimmy, Kimberly, Casey, Jennilyn, Chet, Troy, Case, Claire, Reed, Bryce, Amanda, Cody, Jennifer, and Brandon; 19 great-grandchildren; and a host of nieces, nephews, other family and many, many friends. All of Mr. Reed’s grandchildren will honor him as pallbearers. Honorary pallbearers will be Kilgore Rotarians and the Country Tavern Crew. In lieu of flowers, memorial donations may be made to the Rusk-Panola Children’s Advocacy Center at 610 US 79 N., Henderson, TX 75652, and/or the Rotary Club of Kilgore at P.O. Box 434, Kilgore, TX 75663-0434. Words of comfort may be shared with the family at www.crawfordacrim.com.

Graveside services for Mr. Gordon Reed, 86, of Henderson, will be held at 10:00 a.m. on Tuesday, August 10, 2021, at Duncan Cemetery with Pat Adams officiating. Interment will follow under the direction of Crawford-A. Crim Funeral Home. A... View Obituary & Service Information

The family of Mr. Gordon Reed created this Life Tributes page to make it easy to share your memories.

Graveside services for Mr. Gordon Reed, 86, of Henderson, will...