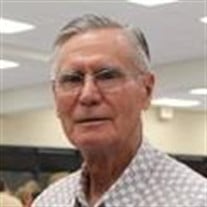 A celebration of the life of Mr. Glynn McGee, 84, of Henderson, will be held at 2:00 p.m. on Saturday, September 28, 2019, at First United Methodist Church with Rev. David Luckert officiating. Interment will be at 1:00 p.m. on Saturday, one hour prior to the Celebration of Life service, at Lakewood Memorial Park under the direction of Crawford-A. Crim Funeral Home. The family will receive friends at a reception following the service on Saturday, in the Great Hall at First United Methodist Church. Mr. McGee passed from this life on September 22, 2019, at his residence. He was born July 17, 1935, in Farmer, Texas to the late Orus Lane and Lena (Petty) McGee. He graduated from Graham High School in 1953 and went on to attend Texas Tech University where he graduated with a Bachelors of Dairy Science in 1957. While at Texas Tech, Glynn was Vice-President of the student body and was named Mr. Texas Tech in 1957. After his education, he served his country in the United States Army and was stationed in Korea. Early in his career, Glynn worked for Foremost Dairies. He had a long career as a Dairy Production Consultant for H.E. Randolph Consultants and went on to be the Quality Assurance Director for Southwest Foods in Tyler. Glynn loved making dairy products, especially ice cream. In August of 1982, the McGees made Henderson their home and joined First United Methodist Church. Having sung in church choirs all of his life, Glynn joined the sanctuary choir and was a member for over 35 years. He was a people person and knew at least one person everywhere he went. Glynn would say his priorities were God, family, friends, academics, and sports (especially baseball), in that order. He enjoyed being outside, and he always did his duty and did it well, no matter how hard or menial. In addition to his parents, he was preceded in death by his siblings, Kenneth McGee, El Wanda Nall and husband Rex, Mary Evelyn McCanlies and husband Ed, and Darrell McGee. Survivors include his wife of 53 years, Mary McGee of Henderson; daughters, Monnie McGee Harper and husband Stephen of Dallas, and Melinda McGee Brown and husband Ian of The Colony; brother, Gary McGee of Olney; grandchildren, Erin Harper, Nathan Brown, Adam Harper, and Daniel Brown; and a host of nieces, nephews, special cousins, and many friends. Honorary pallbearers will be Undre Alexander, Ian Brown, Stephen Harper, Mark McCanlies, Russell McGee, Doug Nall, and Steve Nall. Words of comfort may be shared with the family at www.crawfordacrim.com.

A celebration of the life of Mr. Glynn McGee, 84, of Henderson, will be held at 2:00 p.m. on Saturday, September 28, 2019, at First United Methodist Church with Rev. David Luckert officiating. Interment will be at 1:00 p.m. on Saturday, one... View Obituary & Service Information

The family of Mr. Glynn McGee created this Life Tributes page to make it easy to share your memories.