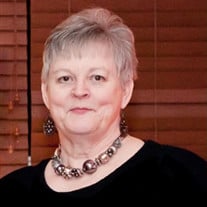 Funeral services for Mrs. Gloria Freeman Riley, 72, of New London will be held at 2:00 p.m. on Friday, October 1, 2021, at London Baptist Church with Rev. Randy Sceroler officiating. Interment will follow at Lakewood Memorial Park in Henderson under the direction of Crawford-A. Crim Funeral Home. The family will receive friends from 12:30 p.m. to service time at the church on Friday. Mrs. Riley passed from this life on September 24, 2021, at Christus Good Shepherd Medical Center in Longview. She was born May 21, 1949, in Henderson to the late Eugean and Nadyne (Dailey) Freeman and spent her childhood in Turnertown. She was a 1967 graduate of West Rusk High School and later married Carl Alan “Archie” Riley on October 19, 1967, in Henderson. Mrs. Riley began her working career at Oilwell Service in Turnertown, Texas in the 70’s. She was later employed by West Rusk ISD and went on to work for Fina Oil Co., Marathon Oil Co., and Anardarko Oil where she retired as an Administrative Assistant. Gloria was a long-time member of London Baptist Church. She enjoyed quilting, sewing, cross stitching and participated in quilting classes at the McMillan Memorial Library in Overton, Texas, where she enjoyed much fun & fellowship. She also enjoyed reading and loved to spend time with friends and family. She was a Beanie Baby enthusiast and collector. She had a love for angels and collecting them brought her a special joy. Mrs. Riley enjoyed traveling with her husband and visiting family in Louisiana. She admired and was a loving “Mem” to her grandchildren and great grandchildren and loved them dearly. She was proud of them and would love to share them with everyone on her social media. Family was very important to her. Raising three boys always kept her on her toes. The boys enjoyed giving her a hard time, joking and teasing with her, but they were her pride and joy. She was so proud of each of them & their beautiful families. She loved the holidays and looked forward to family gatherings. She was very personal when giving to others. Gloria had a beautiful heart, a contagious laugh and a smile that would light up a room. As an adult and mother of three, she pursued and completed her Associate’s Degree from Kilgore College in the 80’s. In addition to her parents, Mrs. Riley was preceded in death by her husband, Carl Alan “Archie” Riley; and her grandparents, Virgil H. and Lillie Dailey, and J.W. Freeman, Sr. and Lorean Freeman. Survivors include her sons, Curtis Riley and wife Kim Riley, Rodney Riley and wife Angie Riley, and Ryan Riley and wife Ginger Riley; grandchildren, Shelby Riley Bearden and husband Stephen Bearden, Katelyn Riley Hofbauer and husband Jared Hofbauer, Collin Riley, Mason Riley, Tanner Riley, and Maddi Grace Riley; great-grandchildren, Rhett Bearden, Reese Bearden, and Riley Kate Hofbauer; and brothers, Charles Freeman, and Randy Freeman and wife Donna Freeman. She also left many beloved nieces, nephews and cousins behind. In lieu of flowers, please make donations to the London Baptist Church at P.O. Box 198, New London, Texas 75682 and/or The London Museum at P.O. Box 477, New London, Texas, 75682. Pallbearers will be Tanner Riley, Collin Riley, Mason Riley, Stephen Bearden, Jared Hofbauer, Tim Hayden, and Casey Freeman. Words of comfort may be shared with the family at www. crawfordacrim.com.

The family of Mrs. Gloria Freeman Riley created this Life Tributes page to make it easy to share your memories.