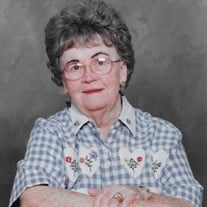 Funeral services for Mrs. Gerena Sumrall, 84, of Mansfield, formerly of Henderson, will be at 10:00 a.m., Tuesday, March 9, 2021 at Crawford - A. Crim Funeral Home chapel with Rev. Glen Ketchum officiating. Burial will follow at Rusk County Memorial Gardens under the direction of Crawford - A. Crim Funeral Home of Henderson. Mrs. Sumrall passed away March 6, 2021 at Legends of Mansfield. She was born Dec. 6, 1936 in Granite City, IL to the late Arthur and Irene Ahner. She had worked many years as a clerk for freight companies, and was a former member of Calvary Assembly of God in Henderson. In addition to her parents, she was preceded in death by her husband, James Sumrall; son, James Sumrall, Jr.; and son-in-law, Chris Dougherty. Survivors include: daughter, Paula Dougherty of Savannah, TN; daughter-in-law, Teresa Sumrall of Granbury, TX; three grandchildren, Kristine Stafford and husband Ryan of Granbury, TX, Jason Sumrall and wife Alex of Burleson, TX, and Jennifer Lindsay of Friedheim, MO; and three great-grandchildren, David, Gracie and Wyatt. Condolences may be made at www.crawfordacrim.com.

The family of Mrs. Gerena Sumrall created this Life Tributes page to make it easy to share your memories.