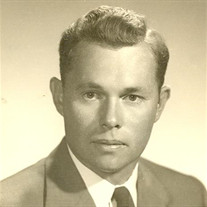 George Dewey McClelland completed his long and accomplished earthly journey, entering into the presence of his Lord and Savior on December 21, 2017, in Henderson, Texas. George was born on May 4, 1922, in Marshall, Texas. In 1931, George moved to Henderson with his parents, Marie Gehbauer McClelland and James Patrick McClelland, Sr., an attorney and abstracter. George was the oldest of three brothers. George graduated from Henderson High School in 1939 as valedictorian with a perfect 5, or A, average. In 1943, George graduated from Texas A&M as a Distinguished Student with a BS in Mechanical Engineering. During World War II, he served as Captain in the US Army Corps of Engineers, 1886th Aviation Battalion, on Guam and Okinawa. George served as Company Commander on Okinawa, where his group constructed B-29 and fighter fields. On October 20, 1946, George married Sara Kyger McClelland in Henderson, Texas. George and Sara’s 71-year marriage was a guiding light to all who knew this loving couple, and most of all to their children and grandchildren. George and Sara lived in many locations across the United States, as George worked as an engineer for various companies in New Jersey, Connecticut, Texas, Oklahoma, Alabama, Washington DC, and California. For twenty-six years, George and Sara lived in the Baton Rouge area while George worked for Dow Chemical’s Louisiana Division in Plaquemine, retiring as Chief Project Engineer in 1983. Their four children graduated from Lee High School. They were active members of the First Baptist Church of Port Allen and later Southside Baptist Church. George and Sara returned to Henderson, Texas, after retirement, re-joining First Baptist Church of Henderson. George and Sara traveled to Europe and throughout the United States together. They accomplished many great projects, including the 9-1-1 mapping and addressing of Rusk County and Harrison County in Texas in the 1990s. George served as the Executive Director of the 9-1-1 district and was responsible for the implementation of 9-1-1 systems in Rusk and Harrison Counties. George worked full time without pay for three years, so Henderson, Rusk County, and Harrison County could have the most advanced 9-1-1 system. George served on the Board of Directors of both the Friends of Rusk County Library and the Heritage Association, participating in fundraising for both organizations. In 2003, George was named as one of the HISD Distinguished Alumni. George is survived by his loving family: Children, Ann McClelland Bishop (Jerry Zamzow) of Houston; Mary Kay Kindhauser-McClelland (Georges) of Geneva, Switzerland; Patricia McClelland Williams (Larry) of Dallas; and George McClelland, MD (Tricia) of Baton Rouge, Louisiana. Sara and George have eight grandchildren and four great-grandchildren: James Bishop (Katherine) of Highlands Ranch, Colorado ; Margaux Kindhauser of Geneva, Switzerland; Katherine Lynn Williams McLeod (Peter) and Marie Claire Williams of Dallas; Ashley Marie McClelland Gallifant (Caleb) of Louisville, Kentucky; Sara Katherine McClelland David (Blake), Joseph McClelland, and Benjamin McClelland of Baton Rouge. Great grandchildren include Benjamin and Jason Bishop; and William and Julia Gallifant. George is also survived by his brother, Robert McClelland (Shirley) of Montgomery, Texas and his sister-in-law, Carol Lynn McClelland, and many loving nieces and nephews and their extended families, whom he valued greatly. Special thanks are expressed to Michele Spaulding, George and Sara’s caring and competent caregiver. George is preceded in death by his wife, Sara Kyger McClelland; parents, Marie and Pat McClelland; and his brother, James Patrick McClelland, MD. He was also preceded in death by his sister-in-law, Faye McClelland. Visitation will be held on Wednesday, December 27, 2017, at 1:00 pm followed by services at 2:00 pm at Crawford A. Crim Funeral Home Chapel, 1414 S. Main Street, Henderson, Texas. Officiating minister is Don Edmiston. Burial to follow at Lakewood Cemetery. Pallbearers are members of the family. In lieu of flowers, the family requests that memorial gifts be made to the Friends of the Rusk County Library, 106 East Main Street, Henderson, Texas, 75652 or a charity of choice. Words of comfort may be shared with the family at www.crawfordacrim.com.

George Dewey McClelland completed his long and accomplished earthly journey, entering into the presence of his Lord and Savior on December 21, 2017, in Henderson, Texas. George was born on May 4, 1922, in Marshall, Texas. In 1931, George moved... View Obituary & Service Information

The family of Mr. George Dewey McClelland Sr. created this Life Tributes page to make it easy to share your memories.