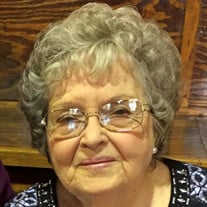 Funeral Services for Mrs. Geneva Gibson Craycraft, 92, of Mount Enterprise, Texas will be held at 11:00 am on Friday, November 19, 2021, in the chapel at Crawford-A. Crim Funeral home with Bob Payne officiating. Interment will follow at King Cemetery under the direction of Crawford-A. Crim Funeral Home. The family will receive friends from 10:00 am until service time on Friday, November 19, 2021 at the funeral home. Mrs. Craycraft passed from this life November 17, 2021 at the age of 92 at Autumn Leaves Nursing and Rehabilitation in Henderson, Texas. She was born June 25th, 1929 to W. E. Gibson and Willie James Gibson in the Helmic Community in Trinity County, Texas. As a young child, she and her family moved to Centerville, Texas, also in Trinity County, where she attended school. She graduated as valedictorian of Centerville High School in 1946 at the age of 16. Following her high school graduation, she attended Sam Houston State College for one year. She then taught for two years in the Centerville Independent School District on an emergency teaching certificate. It was during this time, she met and married Ben Craycraft on September 4th, 1948. Later, they moved to Mount Enterprise where she continued her college education at Stephen F. Austin State College earning both Bachelors and Master’s Degrees in Elementary Education. Mrs. Craycraft was employed by the Mount Enterprise Independent School District for 32 years being the only 1st grade teacher in the District until her retirement. When Mrs. Craycraft began her teaching career, kindergarten had yet to be introduced in the District; hence, for many of her students, she was their first mother figure away from home. She pulled teeth, cut bangs, provided clothing, all the while freely sharing her smiles, love and teaching expertise with two generations of students. Among her students were all three of her children and one son-in-law. Mrs. Craycraft was recognized by Who’s Who Among America’s Teachers. She was an active member of the Mount Enterprise church of Christ and enjoyed sewing, tending her flowers, gardening and playing the piano. Mrs. Craycraft was preceded in death by her beloved husband of 66 years Ben Craycraft, parents W.E. and Willie Gibson, brother James Lanier Gibson and daughter-in-law Sally Craycraft. She is survived by son Ken Craycraft of Frisco, Texas, daughters Deidra Rivers and husband Barry, Benita Tabch and husband Moni all of Mount Enterprise. grandchildren Chris Rivers (Tiffany) of Nacogdoches, Texas, Bettie Rivers of Carrollton, Texas, Chad Craycraft (Krystle) of Highland Park, Texas and Joumana Williams (Stephen) of Lindale, Texas, great grandchildren Hadyn and Cade Rivers, Sofia Cabrera, Benjamin Williams and numerous nieces and nephews. Pallbearers will be grandsons, Chris Rivers and Chad Craycraft, great-grandson, Cade Rivers, nephews, Mike Dodds, Ray Craycraft, Paul Craycraft, and David Jarvis. In lieu of flowers, donations may be made to Hospice of East Texas, 4111 University Blvd. Tyler, Texas, 75701 or South Main church of Christ, P. O. Box 1597, Henderson, Texas, 75654. The family wishes to thank Ms. Winnie Allison, Jackie Ervin, Hospice of East Texas and the Staff at Autumn Leaves Nursing and Rehabilitation, Hall 300 for their loving and compassionate care. A very heartfelt thank you to a very special friend, Janie Poe, for her unselfish aid and kindness during this difficult time. Words of comfort may be shared with the family at www.crawfordacrim.com.

Funeral Services for Mrs. Geneva Gibson Craycraft, 92, of Mount Enterprise, Texas will be held at 11:00 am on Friday, November 19, 2021, in the chapel at Crawford-A. Crim Funeral home with Bob Payne officiating. Interment will follow at King... View Obituary & Service Information

The family of Mrs. Geneva Craycraft created this Life Tributes page to make it easy to share your memories.