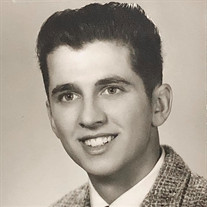 Mr. Gene Edward Patnode, 80, passed away January 25, 2022, in Tyler. He was born September 15, 1941, in Wapato, Washington to Emil Joseph and Emma Matilda (Nelson) Patnode. Mr. Patnode worked as a welder for Northern Border Pipeline and later was the owner and operator of Border to Border as a building contractor. He enjoyed fishing, hunting, and traveling. Mr. Patnode was always a farmer at heart and enjoyed both farming and ranching, he loved his cows. He was of the Baptist faith. Mr. Patnode served his country in the United States Air Force and was stationed in Morocco and Rapid City, South Dakota. He was preceded in death by his parents, Emil and Matilda Patnode; brother, Donald Patnode; and son, Gene J. Patnode. Survivors include: his daughters, Susan Lovato and husband David of Rock Springs, Wyoming, Pamela Combs and husband Gary of Henderson, Texas, Lisa Frost and husband Kevin of Pingree, Idaho; brothers, Merle Patnode of Washington, Melvin Patnode and wife Carol of Washington; sisters, JoAnn Miller of Oregon, Lois Torres and husband Martin of California; grandchildren, Kara Lovato of Colorado, Melissa Lovato of Texas, Lauren McCoy of Henderson, Texas, Jacob Frost of Montana, Jessica Frost of Montana, Morgan Clifton of Nacogdoches, Texas, one great-grandchild, Ryder McCoy; and a host of nieces, nephews, other family and friends. In lieu of flowers the family requests that donations be made to The Gene Patnode Memorial Scholarship Fund at https://gofund.me/30372e92 Interment services for Mr. Patnode will be held at a later date in Wapato, Washington. Words of comfort may be shared with the family at www.crawfordacrim.com.

The family of Mr. Gene Edward Patnode created this Life Tributes page to make it easy to share your memories.