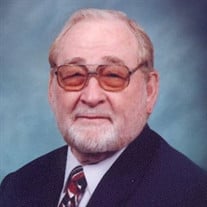 Lloyd Gene Legg, 89, went to be with his Lord on May 10, 2018. He was born in Dallas, Texas on December 12, 1928 and grew up in East Texas, graduating from Mt. Pleasant High School in 1947. He was awarded a football scholarship to Tulsa University where he played tackle with the Golden Hurricanes for four years. He also graduated from Southwestern Baptist Theological Seminary in Fort Worth. He was pastor of Pleasant Grove Baptist Church from 1953 - 1956, after being ordained to the gospel ministry by his home church, First Baptist Church of Mt. Pleasant. In 1952 he married his high school sweetheart, Mary Leigh Anderson, and their union was blessed with three children- Mary Elizabeth, Arnold Lloyd, and Linda Leigh. Both Gene and Mary Leigh had individually received a call of God to foreign missions and in 1956, they were appointed to Nigeria, West Africa by the now International Mission Board of Southern Baptist Convention. They served together in Southern Nigeria as advisors to churches and then as a hospital administrator and nurse in Kontogoro Baptist Hospital in Northern Nigeria, until her illness and death from cancer in 1972. After her death, Gene continued his missionary career in Northern Nigeria as a single missionary, teaching in a Bible college and serving as business administrator at Jos Baptist High School and being father for his two younger children. In 1975 the mission transferred Gene to Eku Baptist Hospital where he served as administrator of the hospital. In 1978, he married missionary nurse, Jackie Eubank, who taught in the school of nursing associated with the hospital. In addition to his duties at the hospital, Gene served as an advisor to an association of churches, directed maintenance at the hospital, and taught at the Bible College in Eku. After 35 years of serving as a career missionary, he and Jackie retired and bought a home in Henderson in 1991 where two of his children were living. He substituted in the HISD and also worked part time as a minister to singles at FBC Henderson. At the request of the mission board, he and Jackie returned to West Africa for a total of 4 1/2 years between 1992 - 2002 and served in the countries of Senegal, Ghana, and Nigeria. Gene loved serving in West Africa and always found people, in all the countries where he served, that he could communicate with in Hausa, the language of Northern Nigeria. Gene was a member of First Baptist Church Henderson, and of the Adult 7 Men's Sunday School class and was a deacon emeritus. He served as a volunteer at East Texas Training Facility until his stroke in 2010. Though confined to a wheel chair the last seven years of his life, he refused to let it stop him from doing everything he possibly could do and proved he had a tenacious spirit. Gene is preceded in death by his parents, Lloyd and Maurine Legg, his first wife, Mary Leigh, and his son Lloyd. He is survived by his wife Jackie, his daughters and sons-in-law, Beth and Rob Wells of Henderson, and Linda and Steve Roszhart of Greenville, TX, his former daughter-in-law, Janet Redfearn Rab of Nacogdoches, and by nine grandchildren and ten great-grandchildren. He is also survived by a sister, Nancy Hercher and husband Bill of Wichita, KS, and a brother, David Legg and wife Neva of Midland, TX, and five nieces; by sisters-in-law Betty Stanley and Ann Parker and husband Jimmy of Georgia and by Jackie's twenty-one nieces and nephews who called him Uncle Gene. In lieu of flowers, donations may be given to the Lottie Moon Christmas offering through First Baptist Church Henderson, 207 West Main Street, Henderson, TX 75652, or to the Mary Leigh Legg Memorial Fund, IMB, P. O. Box 6767 Richmond, VA 23230, which benefits a Nigerian Baptist Seminary where Gene had taught. A celebration of his life is planned at First Baptist Church Henderson on Thursday, May 17, 2018 at 2 PM with Dr. David Higgs officiating under the direction of Crawford-A. Crim Funeral Home. The family will greet guests after the service in the church mall. Words of comfort may be shared with the family at www.crawfordacrim.com.

Lloyd Gene Legg, 89, went to be with his Lord on May 10, 2018. He was born in Dallas, Texas on December 12, 1928 and grew up in East Texas, graduating from Mt. Pleasant High School in 1947. He was awarded a football scholarship to Tulsa University... View Obituary & Service Information

The family of Rev. Gene Legg created this Life Tributes page to make it easy to share your memories.