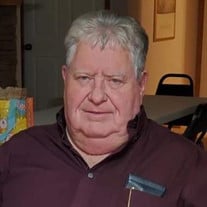 Funeral services for Mr. Gene Hancock, 74, of Overton, will be at 10 a.m., Saturday, January 23, 2021 at Crawford - A. Crim Funeral Home chapel with Rev. Bill Kuykendall and Rev. Frank Lane officiating. Interment will follow at Mason Cemetery in Arp under the direction of Crawford - A. Crim Funeral Home of Henderson. Visitation will be from 6:00 - 8:00 p.m., Friday, January 22, 2021 at the funeral home. Mr. Hancock passed away January 18, 2021 at Christus Mother Frances Hospital in Tyler. He was born March 1, 1946 in Price, Texas, to the late George Everett and Lorene E. Hancock. Gene graduated with a degree in Industrial Drafting from Kilgore College in 1968, and in 1992 with a bachelor’s degree in Business Management from LeTourneau University. As a Project Manager from 1978 to 2016 for Tyler-based Howe-Baker Engineers, which was later acquired by CB&I, he supervised projects around the globe, including in Chile, Egypt, Angola and Dubai. Mr. Hancock also served on the Tyler Junior College welding program advisory committee and was a certified welding inspector for the American Welding Society. In his spare time, he was an avid deer hunter and traveled the world with his wife, but he most loved being in his motor home with a view of the mountains. Gene was a member of the Model A Club in Tyler. He was also a Master Mason and a member of Canton Lodge #98 AF & AM. He loved to smoke briskets to feed his family on birthdays and holidays. Mr. Hancock was a member of Calvary Baptist Church in Henderson. In addition to his parents, he was preceded in death by his sister, Georgia Mae Gaddis, and brother, Johnny Hancock. Survivors include his wife of 53 years, Charlene Hancock of Overton; three daughters, Tina Willis of Lindale, Angela Jackson and husband John of Tatum, and Christie Hancock and husband Matt Hinckley of Garland; six grandchildren, Carey Adams and husband Chase, David Fry and wife Taylor, Kevin Fry, Raina Jackson, Austin Jackson, and Hailey English; three great-grandchildren, and one on the way; brother, Joe Hancock and wife Jo Ruth of Tyler, and sister-in-law, Linda Moore of Arp; and several nieces and nephews. Pallbearers are Billy Moore, Randy Lyles, David Fry, Kevin Fry, Mark Hayes, and Austin Jackson. Honorary pallbearers will be the Masonic Canton #98 Lodge. Condolences may be made at www.crawfordacrim.com.

The family of Mr. Gene Hancock created this Life Tributes page to make it easy to share your memories.

Funeral services for Mr. Gene Hancock, 74, of Overton, will be...