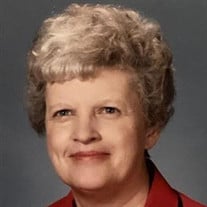 Funeral services of Mrs. Gay Nell Taylor Wylie, 78 of Henderson will be held Tuesday at 2:00 p.m. June 29, 2021 at Crawford-A. Crim Funeral Home in Henderson, Texas with Macky Buchanan and Linda Kimberly officiating. Burial will follow in the Strong Cemetery under the direction of Crawford-A. Crim Funeral Home. Visitation will be held at Crawford-A. Crim in Henderson from 5-7 pm on Monday, June 28, 2021. Mrs. Wylie passed away on June 26, 2021 in Henderson. She was born October 11, 1942 to Dolphus and Lacy Taylor in Henderson, Texas. She was a member of the Blossom Hill United Methodist Church in the Chapman Community. She was preceded in death by her parents Dolphus and Lacy Taylor. Survivors include her husband of 61 years, Hugh Bob Wylie of Henderson, son, Stacy Wylie and wife Jaynellen of Henderson, and son, Torrey Wylie and wife Dee of Henderson. Grandchildren include Alyssa Pruitt and husband Braxton of Henderson, Tanner Wylie of Fort Davis, Grayson Wylie of Nacogdoches, and great grandchild Cameron Pruitt. Mrs Wylie was employed by Pine Tree ISD as a teacher aid and office help. She also worked at Jordan Country Daycare. She had a servant’s heart and was always helping others. She always loved on those around her. Pallbearers will be Tanner Wylie, Grayson Wylie, Braxton Pruitt, Austin Buchanan, Bobby Clark, Mike Cimino, and Steve Baker. Words of comfort may be shared with the family at www.crawfordacrim.com.

The family of Mrs. Gay Nell Wylie created this Life Tributes page to make it easy to share your memories.