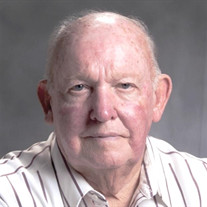 Funeral services for Mr. G.C. Rodriguez Jr., 84, of Henderson, will be held at 4:00 p.m. on Saturday, July 13, 2019, in the chapel at Crawford-A. Crim Funeral Home with Pastor Jeremy Nobles officiating. Interment will follow at Rusk County Memorial Gardens under the direction of Crawford-A. Crim Funeral Home. The family will receive friends from 2 p.m. until service time on Saturday at the funeral home. Mr. Rodriguez passed from this life on July 9, 2019, at UT Health in Henderson. He was born January 1, 1935, in Henderson to the late Grover and Myrtle (Dickey) Rodriguez and was a life long resident of Henderson. He graduated from Henderson High School in 1951 and then went on to work, first, as a lineman for Eastex Telephone Cooperative and later advancing to the position of Equipment Manager/Supervisor for the East Texas region for United Telephone, now Sprint. G.C. served as director for the Pioneer Club in Overton and was known as a barbeque master. Above all, he was a loving father and grandfather. In addition to his parents, he was preceded in death by his wife of 51 years, Maryland De'Lois Rodriguez; and brothers and sisters, Nolan Rodriguez, Bacumn Rodriguez, Wilda Andrews, Peggy Farlow, and Sgt. James Rodriguez. Survivors include his sons, Michael Rodriguez of Laredo, and Terry Rodriguez and wife Carol of Henderson; daughter, Grace Jackson and husband Darryl of Lumberton; brother, Robert Rodriguez and wife Doris of Carthage; sisters, Francis Crane of Ft. Worth, and Barbara Mabry of Pacola, Oklahoma; 6 grandchildren, Tiffany, Haley, Jordan, Emily, Felicia, and Amanda; 9 great-grandchildren; and a host of nieces, nephews, cousins, other family and friends. Pallbearers will be Mike Fox, Scott Andrews, Billy Bishop, Troy Maxwell, Nathan Tarver, and David Rodriguez. Words of comfort may be shared with the family at www.crawfordacrim.com.

Funeral services for Mr. G.C. Rodriguez Jr., 84, of Henderson, will be held at 4:00 p.m. on Saturday, July 13, 2019, in the chapel at Crawford-A. Crim Funeral Home with Pastor Jeremy Nobles officiating. Interment will follow at Rusk County... View Obituary & Service Information

The family of Mr. G.C. Rodriguez Jr. created this Life Tributes page to make it easy to share your memories.