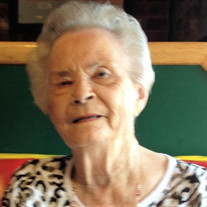 Frances Ross Joplin, 91, passed away peacefully at Sunrise Memory Care in Fort Worth, Texas on Tuesday, November 28. She was born in Rusk County, Texas to Maud Findley Ross and Monnie M. Ross, Sr. and was one of eight siblings. She graduated from Henderson High School in 1944 and Henderson Memorial Hospital Nursing School. Frances met James E. Joplin (Jim) at the Henderson Memorial Hospital where she was employed as a nurse, and they married on December 29, 1951. They had two children, a son and a daughter. The couple lived in Irving, Texas while raising their children. During that time, Frances was a homemaker, a bookkeeper for several companies, and assisted her husband in managing a Shell Gas station they owned. Frances and Jim were active members of Irving’s First Baptist Church and volunteered their time in all areas of the church. Frances would load up all the neighborhood children every year and take them to Vacation Bible School. She also taught both Sunday School and Training Union at the church. She was active in civic activities, teaching swim lessons at the community pool, and was an active parent at school and the local YMCA. After their children were grown, Frances and Jim moved back to their hometown of Henderson where they were active at both Laneville Baptist Church in Laneville and Trinity Baptist Church in Henderson. Frances doted on her children and grandchildren, and was adored by her entire family. She had many friends because she was a good friend. She was also very close to her siblings. Her Christian values, wit, humor and love will be missed. Her husband, Jim, preceded her in death in 2008. After his passing, Frances moved to senior living in Fort Worth where she made many more friends. She is survived by her son, James A. Joplin of Austin, Texas, daughter Ella Joplin Hood of Benbrook, Texas, grandsons Ben (wife, Kim) Hood, Taylor (wife, Kristen) Hood, and Harrison Hood. She is also survived by one sister, Betsy (husband, Ken) Terry of Canton, Texas, two brothers, Jim (wife, Karen) of Tyler, Texas, and Donald (wife, Diane) of Plano, Texas. Services will be held on Saturday, December 2nd at Crawford-A Crim Funeral Home in Henderson, with visitation from 1-2 pm, and chapel service following at 2 pm, officiated by her brother, Rev. Jim Ross, and her nephew, Rev. Owen Ross. Burial will follow at the Laneville Cemetery in Laneville. Pallbearers are grandsons, Ben Hood, Taylor Hood, and Harrison Hood, and nephews, Fred Anderson, Phil Terry, and Ken Ross. Other nephews will serve as honorary pallbearers: Allen Ross, Owen Ross, Ryan Ross, David Ross, Don Ross, Stacy Ross, Doyle Ross, and Jason Flanagan. In lieu of flowers, memorials may be made in her name to the Alzheimer's Association, 225 N. Michigan Ave., Fl. 17, Chicago, IL 60601, or to Encompass Hospice, 901 W. Rosedale #250, Fort Worth, TX 76104. The staff at Sunrise Memory Care in Ft. Worth were a blessing to Frances and cared for her with genuine love. They are very appreciated, as was the Hospice team. Their care will never be forgotten. Condolences may be made to the family at www.crawfordacrim.com.

Frances Ross Joplin, 91, passed away peacefully at Sunrise Memory Care in Fort Worth, Texas on Tuesday, November 28. She was born in Rusk County, Texas to Maud Findley Ross and Monnie M. Ross, Sr. and was one of eight siblings. She graduated... View Obituary & Service Information

The family of Mrs. Frances Ross Joplin created this Life Tributes page to make it easy to share your memories.