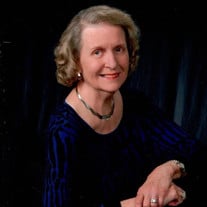 A Celebration of Life service for Mrs. Faye Thweatt Keitt, 85, of Henderson, will be held at 11:00 am Tuesday, March 3, 2020 at First Baptist Church of Henderson, with Dr. David Higgs officiating under the direction of Crawford-A. Crim Funeral Home. The family will receive friends following the service in The Family Life Center at the church. Faye passed away Sunday, March 1, 2020 at Brookdale in Henderson. She was born December 8, 1934, in Shreveport, Louisiana. She spent the entirety of her childhood in Shreveport, and graduated from Byrd High School where she was active in many clubs and was captain of the ROTC. Faye received her Bachelor of Arts degree in Education from Baylor University in May of 1956. She was always an encourager to her friends, as well as accomplished in her studies. Faye married the love of her life, Luther Rush Keitt, on June 2, 1956. While residing in Hubbard, Texas they started a family together. They later moved from Hubbard to Henderson in 1965. Her family and her home were her pride and joy. Faye loved to shop and had a keen eye for collecting antiques. She had a knack for finding treasures and really enjoyed collecting for her antique shop that she had for several years at Main Street Gallery. For many years, Faye devoted her time to The Renaissance Club, Varied Arts Club, and Forum. She enjoyed playing bridge with the Friday bridge club and spending time with her many dear friends who meant so much to her. She also had a big heart for animals, and adopted and loved several rescue pets over the years, the last one named Buddy, who was a wonderful companion to her later in life. She was very involved with her Sunday School class, and was an active member of First Baptist Church in Henderson. She was preceded in death by her husband, Luther Rush Keitt, and her parents, John Bradford and Bettie Thweatt. Survivors include her daughter, Beth Brubaker and husband Jim of Spring, TX, son Brad Keitt and wife Paige of Henderson, daughter Susan Gorney and husband Mike of Nashville, TN, and daughter Melanie Morris and husband Paul of Henderson; grandchildren, Christian Patterson and husband Chase of Kilgore, Collyn Keitt, Anna Gorney, Rush Gorney, Madeline Morris, and Adam Morris; great-grandchildren, Elliott Patterson and Emmett Patterson; along with many other loving friends and family. In lieu of flowers, memorials may be made to First Baptist Church at 207 W. Main, Henderson, TX 75654. Condolences may be made at www.crawfordacrim.com.

A Celebration of Life service for Mrs. Faye Thweatt Keitt, 85, of Henderson, will be held at 11:00 am Tuesday, March 3, 2020 at First Baptist Church of Henderson, with Dr. David Higgs officiating under the direction of Crawford-A. Crim Funeral... View Obituary & Service Information

The family of Mrs. Faye Thweatt Keitt created this Life Tributes page to make it easy to share your memories.

A Celebration of Life service for Mrs. Faye Thweatt Keitt, 85,...