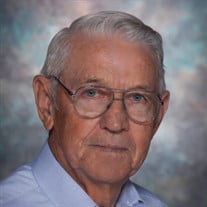 Funeral services for Euel Mays Faulkner, 92, of Henderson, will be held at 2:00 p.m., Monday, January 10, 2022 with visitation at 1:00 p.m. both at Crawford-A. Crim chapel with Thomas Monroe officiating. Interment will follow at Liberty Missionary Baptist Church Cemetery under the direction of Crawford-A. Crim Funeral Home. Euel Mays Faulkner peacefully went into the arms of his Lord and Savior Jesus Christ early morning of January 6, 2022 after a brief illness. He was surrounded by his loving family at home. Euel was born April 19, 1929 in the Liberty Community to parents Morgan and Velma Faulkner. He was a life long resident of Rusk County. He married the love of his life, Barbara Watson seventy-one years ago. Euel served in the United States Army during the Korean conflict in Germany as a radio operator. Building many of the homes in the Henderson area, Euel was a master carpenter and mentored others in the trade. Treasures he constructed can be found in the homes of many families and friends. Liberty Missionary Baptist Church was his church since 1946. He served in numerous positions in the church. His faith was the most important aspect of his life, and he was a witness to all who knew him. Euel was preceded in death by his parents, Morgan and Velma Faulkner; sons, Jon Eric and Lowell Faulkner; and brothers, Buddy and Vernon Faulkner. Survivors include his wife, Barbara; son, Derek and wife Vanessa Sloan Faulkner of Granbury, Texas; grandchildren, Pierce Faulkner of Seattle, Washington, Morgan Faulkner of Salt Lake City, Utah, and Charles Heath Faulkner of Cameron Park, California; sisters, Virginia Foster and Marion Miller; along with several nieces and nephews. Those serving as Pallbearers include Don Dyess, Richard Faulkner, Dan Fitzgerald, Howard Korff, Alex Miller, and David Yule. Memorials can be made to Liberty Missionary Baptist Church at 12025 County Road 397 E, Henderson, Texas 75652 and/or St. Jude Children’s Research Hospital at 501 St. Jude Place, Memphis, Tennessee 38105. Words of comfort may be shared with the family at www.crawfordacrim.com.

Funeral services for Euel Mays Faulkner, 92, of Henderson, will be held at 2:00 p.m., Monday, January 10, 2022 with visitation at 1:00 p.m. both at Crawford-A. Crim chapel with Thomas Monroe officiating. Interment will follow at Liberty Missionary... View Obituary & Service Information

The family of Mr. Euel Mays Faulkner created this Life Tributes page to make it easy to share your memories.

Funeral services for Euel Mays Faulkner, 92, of Henderson, will...