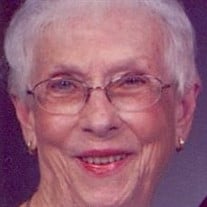 Esther Monthy Yancy passed away on Friday, June 29, 2018, at Autumn Leaves. A memorial service and burial will be held in the Chapel of Angels at Forest Park Lawndale in Houston, Texas at 2:00 p.m. on Saturday, July 28, 2018. The family will receive friends from 1 p.m. until service time on July 28, at the cemetery. She was 96 years old. She was born in Chippewa Falls, Wisconsin on October 9, 1921, and was raised in Cresco, Iowa. Her parents were Olive Richards Monthy and Emil August Monthy. In 1941 she went to Oakland, California where she met her future husband, Steve Yancy from Coleman, Texas who was in the Navy. He was to be the love of her life. On October 2, 1943, they were married and moved to Houston, Texas. They raised four children. She worked for Curtis-Matheson Scientific in accounting. She was a Girl Scout leader for many years. Following their retirement, they moved to Lake Striker for many years. She was a member of First United Methodist Church of Henderson. She was excellent in counted cross stitch and embroidery. Family and friends now enjoy all the beautiful things she made. She loved to entertain, cook, talk and travel and special family gatherings, especially ones in Galveston. She was in the Volunteer Auxiliary at Henderson Memorial Hospital and also volunteered for the Depot Museum and Howard Dickinson House. After the death of her husband, she lived at Azalea Place and Autumn Leaves. She was preceded in death by her husband, Steve Yancy, son, Richard Yancy, son-in-law, Willard Smith, and brothers, Elvin Monthy and Floyd Monthy and sister-in-law, Rita Monthy. She is survived by her daughter, Linda Banks and husband George of Humble, Texas, son, Roger Yancy and wife Karen of League City, Texas, and daughter, Stephanie Smith of Henderson, Texas, sister-in-law, Dorothy Monthy of Livingston, Texas, three grandsons, Ryan Yancy and wife Sudipta of Katy, Texas, Justin Smith and wife Jessica of Georgetown, Texas, and Travis Smith of Clearwater, Florida, three granddaughters, Ariel Phillips and husband Jay of Liberty, Texas, Jessica Lee and husband Eric of Spring, Texas, and Kimberly Kirkham and husband Chris of League City, Texas, also six great-grandchildren, Brandon and Caitlin Yancy, Kaylee Kirkham, Bruce, Eliza, Ezekiel and Brayden Lee, and numerous nieces and nephews and great-nieces and nephews and many friends. It surprised her to live so long. Words of comfort may be shared with the family at www.crawfordacrim.com.

Esther Monthy Yancy passed away on Friday, June 29, 2018, at Autumn Leaves. A memorial service and burial will be held in the Chapel of Angels at Forest Park Lawndale in Houston, Texas at 2:00 p.m. on Saturday, July 28, 2018. The family will... View Obituary & Service Information

The family of Mrs. Esther Yancy created this Life Tributes page to make it easy to share your memories.