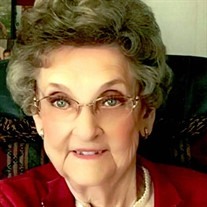 Graveside services for Mrs. Elwyna "Toni" Whitehead, 88, of Henderson, will be held at 12:00 p.m., Monday, October 5, 2020 at Bethel Cemetery with Bro. Bob Payne officiating. Interment will follow under the direction of Crawford-A. Crim Funeral Home. The family will receive friends from 10:00 a.m. to 11:00 a.m. Monday, October 5, 2020 at the funeral home. Elwyna Toni Williams Whitehead, was born October 24, 1931 in Laneville, Texas at home. She was the fifth of seven children of Leondious and Annie Lee Hicks Williams. She passed away on October 1, 2020 at the age of 88 years old. She was a life time member of the South Main Church of Christ. She lived on the Laneville Highway with her parents and siblings where they owned several acres of land, and sold milk, eggs, butter, and farm produce to local families. Her parents were well known in the Bethel Community where they settled after the Civil War. Annie was a seamstress and created beautiful clothing for anyone who wanted her expertise. Elwyna attended Laneville schools and Bethel Church, several of her friends gave her the nickname of "Toni" and she lived by that name for the rest of her life. She met her husband Taylor Whitehead, at age 16 in the fall of 1947, right after World War II. It was a double date to the Movie Theater in Henderson. They were married on January 24, 1948 and have celebrated 72 years together. They bought some land and built a home where they have lived since the early years of their marriage. She loved to sew like her mother. She made quilts for everyone in the family, often they were gifts to begin their married life. She enjoyed canning, cooking, traveling, camping, water skiing, playing Mexican Train, and 42 dominoes with friends. Toni went to work in the 1960's at Nations Fiberglass and then Radio Shack. After retiring she began to travel with her brother and sister to many tourist locations in America including a trip to Hawaii. She began to make porcelain dolls and became very good at creating personality in each one. After recovering from colon cancer she enjoyed time at home. She was preceded in death by her parents, Lee and Annie Hicks Williams; sisters, Marrell Breedlove, Lavern Dorsey Green, Orice Betty; brothers, Eugene Williams, Lee Williams; and one daughter, Glenda Kay Harris in October of 2013. Surviving family members are her husband, Taylor Whitehead; sister, Louette Johnson; sister-in-law, Dorthie Williams. Children include, son-in-law, Dicky Harris and wife Karen, daughter, Sharon Jett of Rockwall; son, Randall Whitehead and wife BJ; six grandchildren, Kevin and Debbie Harris of Plano, Ryan and Hanna Harris of Lindale, Logan and Myra Harris, Brad and Angie Vinson, Lindsey and Gary Spraggins of Rockwall, and Brittney and Cody Geneva; great-grandchildren, Isabella, Joseph, and Eli Harris, Ally and Victoria Harris, Keegan, Landon, and Decklan Harris, Ethan Vinson, Lillian and Gary L. "Tripp" Spraggins III; nieces and nephews, Frank and Paul Breedlove, Don Dorsey, Johnny Betty, Camy Williams Strader, Nancy Williams Breshears, Krystle Williams Penrose, Mark and Jay Johnson, Phyllis Packard, Barbara Whitehead, Karla Whitehead Deluca, Marla Whitehead Boone, Sharla Whitehead Rounsavall, Darla Whitehead Lynch, Reggie Whitehead, and Susie Whitehead Evitts. Pallbearers will be Kevin Harris, Ryan Harris, Logan Harris, Brad Vinson, Dicky Harris, and Gary Spraggins. Condolences may be made at www.crawfordacrim.com.

The family of Mrs. Elwyna "Toni" Whitehead created this Life Tributes page to make it easy to share your memories.