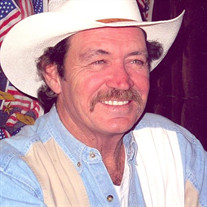 James Elton “Elbo” Smith, 65, of Tatum, was born in Texarkana, Arkansas on December 30, 1953 and left this world that he loved on April 15, 2019. He was a master musician. At eight years of age, he saved money by picking cucumbers on his parent’s farm to buy his first guitar. Elton could play any kind of stringed instrument with ease and was happiest when performing on stage. As a master builder, Elton could complete nearly all phases of any kind of structure—residential or commercial. Another love of Elton’s was flying. He owned several planes and enjoyed flying with his many fellow aviator friends. Throughout his life, he also enjoyed hunting, fishing, camping, swimming, water skiing, and gardening. Elbo never met a stranger. If he knew you, he would do anything for you. Those surviving Elton include his wife of 37 years Janna Smith of Tatum, his son Jesse and Heather of Kaufman, his son Jerod and wife Nikki of Longview, his daughter Rachel Streefkerk and husband Howie of Tatum, his mother Pat Williams Emerson and husband Yank of Queen City, his sister Patsy Brock and husband Mike of Ft. Wayne, Indiana, his brother Tommy Smith and wife Patricia of Waxahachie, his mother-in-law Rita Sharp of Longview, his father-in-law Dwayne Smith of Farmersville, many brothers and sisters-in-laws, 9 grandchildren (Ashley, Syra, Tyler, Jared “Boogie”, Kierra, David, Dylan, Katelyn, and Riley), many aunts, uncles, cousins, nieces, nephews, and many wonderful friends.He was preceded in death by his father James Eddie Smith of Texarkana, Arkansas and granddaughter Harley Streefkerk of Tatum. His celebration of life service will be held at the chapel of Crawford A. Crim Funeral Home in Henderson, Texas on Thursday, April 18, 2019 at 2:00 pm with Kenneth Ross officiating under the direction of Crawford-A. Crim Funeral Home. Honorary pallbearers will be Tony Beason, Lynn Emmons, Darren Crump, Pat Taczek, Tony Taczek, Steven Smith, Russell Wolf, Kelly Amburn, Terry Parker, Charlie Roger, and Harold Walker. Words of comfort may be shared with the family at www.crawfordacrim.com.

The family of Mr. Elton "Elbo" Smith created this Life Tributes page to make it easy to share your memories.