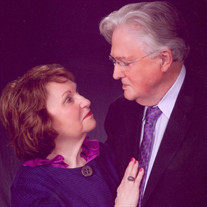 Funeral services for Mrs. Elizabeth (Bettye) Irene Hall, 77, of Henderson, will be held at 10:00 a.m. on Saturday, June 9, 2018, at First Baptist Church with Dr. David Higgs officiating. Interment will follow at Rusk County Memorial Gardens under the direction of Crawford-A. Crim Funeral Home. The family will receive friends from 6-8 p.m. on Friday, June 8, at the funeral home. Bettye was born in Carthage, Arkansas on August 6, 1940, to Aylean Crouse Gray and John M. Gray. She attended public school in Smackover, Arkansas from 1st - 12th grade. While growing up in Smackover, she played the piano for several churches in the area. She attended Ouachita Baptist University in Arkadelphia, AR from 1958-1960. During this time, she met the love of her life, Robert Alan Hall, and they were married on December 18, 1960, at Maple Avenue Baptist Church in Smackover where they served as Minister of Music and Church Pianist. Robert and Bettye also served in churches in El Dorado, AR, White Settlement, TX, and at First Baptist Henderson, TX where they served for over 45 years. Bettye received her bachelor's and master's degrees in education from Stephen F. Austin State University in Nacogdoches, TX. She was a member of the Phi Chapter of Delta Kappa Gamma in Henderson and taught school for 25 years in the Henderson ISD. Her parents and her husband preceded her in death. She is survived by her children Greg Hall and wife Beth of Plainview, TX, Amy Hall of Henderson, TX; brother John W. Gray and wife Beverly of Maumelle, Arkansas; grandchildren, Jake Hall of Longview, TX, Grayson Hall of Dallas, TX, Jessica Deleon and husband Jerrod of Tyler, TX, Chris Sjostrom of Dallas, TX, and Caitlin Hall of Mesquite, TX; and many nieces, nephews, cousins and close friends. Pallbearers will be Jake Hall, Grayson Hall, Chris Sjostrom, Jerrod Deleon, Tim Pool, and Connar Pool. In lieu of flowers, memorial donations may be made to the First Baptist Church Adult Choir at 207 W. Main St., Henderson, TX 75652. Words of comfort may be shared with the family at www.crawfordacrim.com.

The family of Mrs. Elizabeth (Bettye) Irene Hall created this Life Tributes page to make it easy to share your memories.