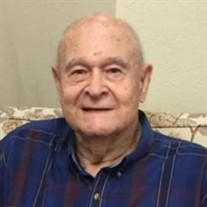 Family graveside services for Mr. Ed Roberts, 97, of Henderson, will be held at Resthaven Cemetery in Jacksonville with Dr. David Higgs and Tim Roberts officiating. Interment will follow under the direction of Crawford-A. Crim Funeral Home. There will be a register book available to pay your respects to Mr. Roberts from 8 a.m. - 6 p.m. on Friday, December 4, at the funeral home. Mr. Roberts passed from this life on Wednesday, December 2, 2020, at the Watkins-Logan Texas State Veterans Home in Tyler. He was born February 21, 1923, in Fayette County to the late Roy and Katy (Hannegan) Roberts and spent many years as a resident of Jacksonville. Mr. Roberts proudly served his country in the United States Navy during WWII. He later went to work for Exxon Pipeline as an electrician, retired after 42 years of service, and was a member of the Exxon Retiree Club. Ed was also a member of First Baptist Church of Henderson. In addition to his parents, he was preceded in death by his wife of 52 years and the mother of his children, Sarah Lucille Roberts; second wife, Mona McShan Roberts; and his son-in-law, Ed Wingo. Survivors include his daughter, Carol Wingo of Henderson; son, Rob Roberts and wife Lisa of Oregon; step-daughter, MaryAnn McShan of Denver; grandchildren, Krissy Sefa and husband Tim of Henderson, Kacy Kersh and husband Clayton of Henderson, and Nicole Mills and husband Josh of San Antonio; great-grandchildren, Hannah, Josh and Lucy Sefa, Kinsey, Karley and Kaclyn Kersh, and Lawson Mills; as well as his special friend, Reta Faye Burks. In lieu of flowers, memorial donations may be made to the Watkins-Logan Texas State Veterans Home at 11466 Honor Ln., Tyler, TX 75708. Words of comfort may be shared with the family at www.crawfordacrim.com.

Family graveside services for Mr. Ed Roberts, 97, of Henderson, will be held at Resthaven Cemetery in Jacksonville with Dr. David Higgs and Tim Roberts officiating. Interment will follow under the direction of Crawford-A. Crim Funeral Home. There... View Obituary & Service Information

The family of Mr. Ed Roberts created this Life Tributes page to make it easy to share your memories.